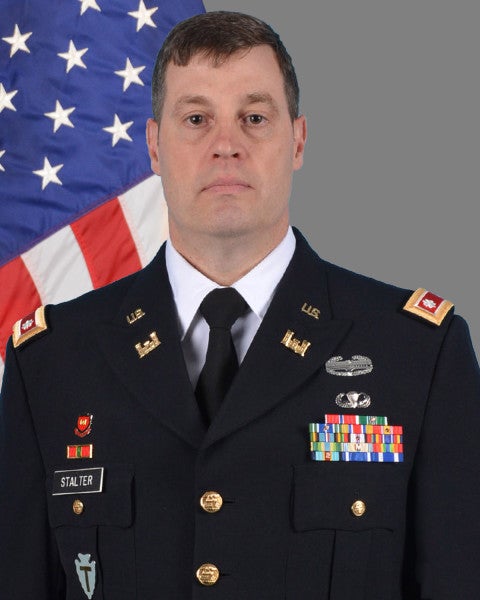 Editor’s Note: The following story highlights a veteran at bp committed to including talented members of the military community in its workplace. bp is a client of Hirepurpose, a Task & Purpose sister company. Learn More.

For most people, “a lot of moving parts” is the work-friendly code phrase for “completely overwhelming.” But not for Texas Army National Guard Lt. Col. George Stalter, who has thrived on the management of complex projects for over two decades.

“I tend to like the larger projects. My interest lies in the complexity of them where you're dealing with a lot of moving parts, so to speak, from logistics to finance to the technical side,” explains George, who is the wells team lead for environment and emergency response at bp in his civilian life. “That's one of the things I've really enjoyed about working for the energy industry, especially bp, is that the scale of the projects are very similar to what I started out with as a young engineer officer.”

From airfields to oil fields

George was commissioned as a second lieutenant engineer officer after earning a bachelor’s degree in environmental engineering at the United States Military Academy. He got his first choice of orders to the Army Corps of Engineers and had the opportunity to work on large-scale engineering projects with a wide impact.

“We assisted the Air Force with some of their construction of their brand-new facilities back in the ‘90s,” George recalls. “When I deployed to Bosnia in 1995-96, as part of the NATO peacekeeping force, I worked with all sorts of projects across the country. These ranged from NATO-level engineering projects to government and private industry and facilitation. We needed to repair the infrastructure to allow NATO forces to operate safely and it also helped the country start to get things back to normal. From airfield repairs, roads, bridges — I did a lot of that project management.”

In addition to interesting work, George found discipline, time management skills and lifelong friends in the Army. But, when he decided to transition to the Army Reserve in 1998 after five years of active duty service, he found himself lacking some key civilian work skills.

“When you're in the military, there are certain things that you don't have to worry about such as how you are going to make money and marketing yourself,” George explains. He says he went back to school for an MBA because “I saw it as a good way for me to get as much information in the shortest period of time while I was transitioning into the business world. It helped me better understand how companies like bp work.”

After graduating, George found a job in the chemical industry. But he missed the large-scale projects, diversity of work and opportunities for growth that he had enjoyed in the military, so he turned to the energy industry.

“In the energy sector there's a broader opportunity set and I think that I can attest to that through my career pathway, that I didn't stay just within one organization,” he says.

Over his 19-year career with bp, George has worked for six different organizations across the company in offices in Chicago, Belgium and Houston. He currently works out of the Houston office, where he leads the Regulatory Compliance, Environment, and Crisis Management/Emergency Response team of the Global Wells Organization. George coordinates multiple teams across bp to accomplish the type of large-scale projects he grew to love in the Army. He currently helps the organization deliver wells at new sites around the world, advancing new technologies and efficiency strategies to reduce carbon emissions, and crafting emergency response plans to save lives, resources and the environment should misfortune strike.

When George moved to Belgium in 2005, he decided to separate from the Army Reserve. But when he found himself back in the states, he recommissioned with the Texas Army National Guard and found bp’s support for his service as heartfelt as it had been nearly a decade before.

“bp has been very supportive — from administrative to leadership — in continuing to serve in the National Guard,” George says.

During both his current and his former service, George says bp’s management and HR department have made his transitions smooth and kept his pay steady, whether he had to leave for his annual two weeks, or for nearly a year, as happened in 2017 when he was activated and sent to Afghanistan. George’s experience is so common that bp has been awarded the Secretary of Defense Employer Support Freedom Award for its support of employees who serve in the Reserves and National Guard. bp has also been named an “Outstanding Veteran Employer” by VetJobs, a “Best of the Best” top veteran-friendly company by U.S. Veterans Magazine, and a “Military-Friendly Employer” by G.I. Jobs magazine.

In both his military and civilian careers, George relishes opportunities to make a difference in the lives of younger service members and veterans.

“It's really exhilarating to be with energetic people that come in and serve in the military,” George says in describing his current position as commander of the 156 Brigade Engineer Battalion of the Texas Army National Guard. “Command in and of itself — just to be with soldiers on weekends, during training periods — is the best experience that an officer can have in the military. For me personally, it is one of the highlights of my career.”

At bp, he is an active participant in the military business support network, which voluntarily supports bp’s military recruiting efforts and connects service member employees through conference calls and military events.

“I've had quite a bit of time in the company and this is the point where I need to help those that are either starting their careers or in the middle of that transition,” George says. “I don't have to try to figure out who do I go to or how do I get involved. We have an organization that I can immediately go to and say I’m here to help.”

bp’s military outreach efforts include one-on-one mentoring for newly separated veterans through Corporate Partners of America, and bp’s Military Placement Program, a yearlong paid placement in which service members work and train with an assigned mentor to learn skills specific to the industry. BP also contributes to scholarships for veterans pursuing degrees in STEM-related fields through a partnership with Student Veterans of America.

George notes that through mentorship and bp’s other veteran-friendly programs, “people do a lot of good work with veteran support throughout the company, even though they may not have served. It's really a positive environment that the company set up for veterans.”

As he progresses in his military and civilian careers, George hopes to move up to the next level of management at bp, promote to a full-bird colonel, and have the opportunity to command a brigade.

“When you get those opportunities as an officer to be in charge of organizations and make positive change and positively impact people's lives, that’s when you look back at your career and say ‘that's what I really enjoyed the most,’” he says. “I want more of that challenge. I think that's the same thing I'm looking for at bp and why I’ve worked for this company for 19 years because I know those opportunities will be there.”