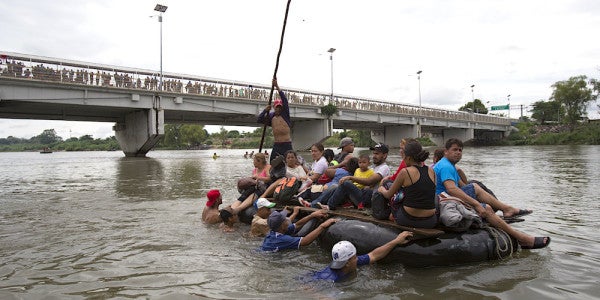 FALFURRIAS, Tex. — Gun-carrying civilian groups and border vigilantes have heard a call to arms in President Donald Trump’s warnings about threats to American security posed by caravans of Central American migrants moving through Mexico. They’re packing coolers and tents, oiling rifles and tuning up aerial drones, with plans to form caravans of their own and trail American troops to the border.

“We’ll observe and report, and offer aid in any way we can,” said Shannon McGauley, a bail bondsman in the Dallas suburbs who is president of the Texas Minutemen. McGauley said he was preparing to head for the Rio Grande in coming days.

“We’ve proved ourselves before, and we’ll prove ourselves again,” he said.

McGauley and others have been roused by the president’s call to restore order and defend the country against what Trump has called “an invasion,” as thousands of Central American migrants advance slowly through southern Mexico toward the U.S. border. Trump has insisted that “unknown Middle Easterners,” “very tough fighters,” and large numbers of violent criminals are traveling among the women, children and families heading north on foot.

The Texas Minutemen, according to McGauley, have 100 volunteers en route to the Rio Grande who want to help stop the migrants, with more likely on the way.

“I can’t put a number on it,” McGauley said. “My phone’s been ringing nonstop for the last seven days. You got other militias, and husbands and wives, people coming from Oregon, Indiana. We’ve even got two from Canada.”

Asked whether his group planned to deploy with weapons, McGauley laughed. “This is Texas, man,” he said.

In this Oct. 20, 2018, file photo, a group of Central American migrants cross the Suchiate River aboard a raft made out of tractor inner tubes and wooden planks, on the the border between Guatemala and Mexico, in Ciudad Hidalgo, Mexico. Militia groups and far-right activists are raising money and announcing plans to head to the Mexican border to help stop the caravan of Central Americans making their way toward the United States.Associated Press/Moises Castillo

And yet, the prospect of armed vigilantes showing up beside thousands of U.S. troops — along with Border Patrol agents, police officers, and migrants — is considered serious enough that militia planners have issued warnings to Army commanders.

According to military planning documents obtained by Newsweek, the military is concerned about the arrival of “unregulated militia members self-deploying to the border in alleged support” of U.S. Customs and Border Protection.

The assessment estimates that 200 militia members could show up. “They operate under the guise of citizen patrols,” the report said, while warning of “incidents of unregulated militias stealing National Guard equipment during deployments.”

The military report provided no further details about the alleged thefts.

Manuel Padilla Jr., the top Border Patrol official in the agency’s Rio Grande Valley sector, the nation’s busiest for illegal crossings, said he has not issued any instructions to agents in the field or to landowners whose properties are adjacent to the river. But he plans to meet with community members in the coming week, he said, to address their concerns.

“We don’t have any specific information about the militias,” said Padilla, reached by phone along the border. “We have seen them in the past, and when things start getting really busy, we have to make sure to let the community know they’re out there.”

“But they’re doing that on their own,” Padilla said.

McGauley said that in addition to weapons and camping gear, his group will have night-vision goggles and aerial drones with thermal sensing equipment, capable of operating in darkness. He emphasized that the group would report any suspicious activity to authorities and would heed any instructions from Border Patrol agents or military personnel.

Several landowners in the area said they do not want the militias around.

Michael Vickers, a veterinarian and rancher who lives an hour north of the border in Falfurrias, said that he will not let militia members from outside the area onto his property and that he doubts most area landowners would trust outsiders.

“They are a bunch of guys with a big mouth and no substance to them,” said Vickers, a Republican who heads the 300-strong Texas Border Volunteers. The group doesn’t call itself a militia, although it patrols ranchland to intercept migrants who hike through the brush to attempt to avoid Border Patrol checkpoints. The group uses ATVs, night-vision goggles, spotlights and trained dogs.

“People on the [Rio Grande] have been calling us,” Vickers said. His group is in a “holding pattern,” he said, adding, “We can have 100 volunteers in a hot area in four to eight hours.

“We’ve already talked to a bunch of landowners who wanted to know if we’ll be operating if the Border Patrol can’t be there to keep their property from being vandalized and their crops from being messed up.”

Others in South Texas are less enthusiastic.

Lucy Kruse, 96, said immigrants often stop on her property as they walk through the bush country, sometimes breaking into a small cabin to sleep. Her family’s ranch lies amid the thorny mesquite brush, cactus and tawny dry grass 80 miles north of the border.

As the migrant caravans head north, she and other landowners in the area worry that the number of trespassers walking through their ranches will increase dramatically. But many say the militias coming to the area also pose a threat.

“I will not let militia on my land,” Kruse said. “They’re civilians stepping into a situation where the Border Patrol is supposed to be in control and make decisions. They could damage property or harm workers. I would guess they would be trigger-happy. If they shot someone, they might just say the person they shot was reaching for a gun.”