Milley says China will be the biggest military threat for 100 years and warns it is improving ‘very, very rapidly’

President Donald Trump's nominee to be chairman of the Joint Chiefs of Staff warned during his Senate confirmation hearing that China would be the US's chief military rival for the next century. 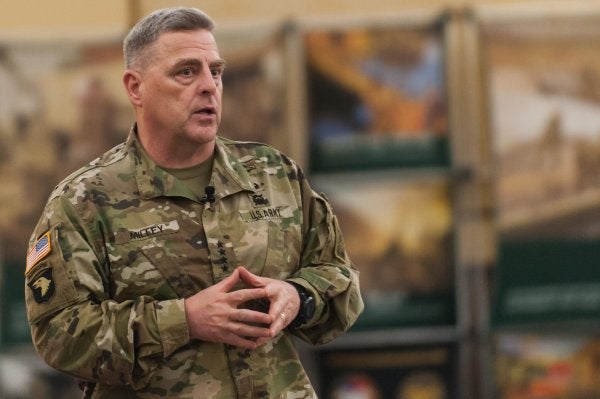 President Donald Trump's nominee to be chairman of the Joint Chiefs of Staff warned during his Senate confirmation hearing that China would be the US's chief military rival for the next century.

“I think China is the main challenger to US national security over the next 50, 100 years,” Milley told lawmakers. “I think some historian in 2119 will look back at this century, write a book, central theme of the story will be the relationship between the United States and China.”

“I think China has expanded throughout all the regions of the globe, in clear competition,” he added. “Primarily in competition for resources in order to build and improve their military, to fund and fuel their economy.”

“They're outspending us in research and development and procurement … We, the United States, need to make sure that we do not lose our advantages that we have relative to other countries, specifically relative to China.”

Milley described how China had closely monitored US military operations in the Middle East, using the lessons to build its own military.

“China went to school on us,” he said. “They watched us very closely in the First Gulf War, Second Gulf War, watched our capabilities and in many, many ways they have mimicked those and they have adopted many of the doctrines and the organizations, et cetera.”

Milley emphasized, though, that China was not an enemy of the US.

“With respect to China, China is not an enemy,” he said. “I want to make that clear. They are an adversary. I would say they're a competitor, but that's different than an enemy.

“An enemy in my language, military language, means you're in an act of armed conflict, you're at war. We're not there. We don't want to be there. We want peace, not war, with China. But having said that, I think that the best way to do that is to make sure that we are prepared.”

If confirmed, Milley will replace Gen. Joseph F. Dunford as chairman of the Joint Chiefs, the most powerful military official in the United States, who personally advises the president on military strategy.

His comments on China's military capacity come amid an escalating trade dispute between China and the US, with the US in May raising the tariff rate on billions of dollars in imports from China and China retaliating with tariff hikes on US goods.