The U.S. military's top officer reportedly spoke with confidantes about possibly resigning from his position as the chairman of the Joint Chiefs of Staff following the criticism surrounding a controversial White House trip to St. John's Episcopal Church earlier this month 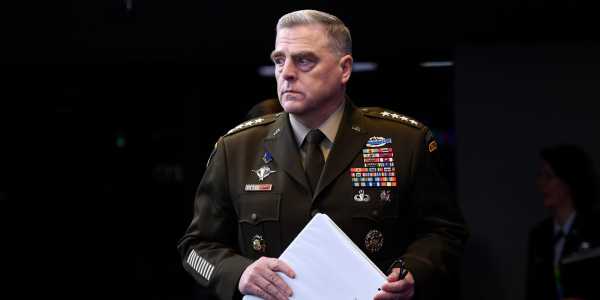 The U.S. military's top officer reportedly spoke with confidantes about possibly resigning from his position as the chairman of the Joint Chiefs of Staff following the criticism surrounding a controversial White House trip to St. John's Episcopal Church earlier this month.

U.S. Army Gen. Mark Milley, who was pictured with President Donald Trump and other top officials during the visit on June 1, grew concerned after the incident and browsed the news reports of the trip, according to an NBC News report published Thursday.

Milley was criticized for being a member of Trump's entourage during the visit to the church, which was partly damaged during demonstrations the previous night. Trump was accused of staging the entire trip as a photo session after he gave brief remarks and posed for pictures while holding up a Bible.

Critics also noted Milley was wearing his battledress uniform during the trip instead of his usual, formal uniform he wears in the White House. The presence of his battledress uniform prompted a debate about whether the general was embellishing in a combative, “battlespace” culture during what was a peaceful protest in the area.

Following the scrutiny, Milley contacted his confidants to discuss possibly resigning, several defense officials said to NBC News. One official told the outlet that Milley had communicated “to several of his long-standing mentors to discuss his situation,” but added he did not contact them to discuss a resignation.

Trump, both publicly and privately, threatened to use active-duty forces to quell the protests, despite the Washington DC National Guard already having been activated — a position both Milley and Defense Secretary Mark Esper strongly opposed, according to multiple news reports.

In a previous Oval Office meeting with Trump's senior staff, the president pressed his aides for answers on getting the nation's capital, which was hit with both peaceful protests and rioting, “under control,” a senior administration official reportedly said.

During a graduation ceremony for the National Defense University on Thursday morning, Milley apologized for the incident and said he “should not have been there.”

“My presence in that moment and in that environment created a perception of the military involved in domestic politics,” Milley said.

“As senior leaders, everything you do will be closely watched,” Milley added. “And I am not immune. As many of you saw, the result of the photograph of me at Lafayette Square last week, that sparked a national debate about the role of the military in civil society.”