'I know that a lot of people are out there – I've seen words like, oh, the intel was razor thin. 'Very, very few people saw that intelligence.' 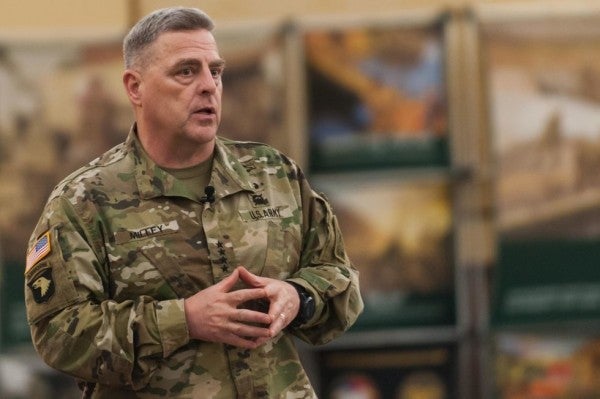 Eventually, the chairman of the Joint Chiefs of Staff will disclose the evidence that shows Maj. Gen. Qasem Soleimani was planning an imminent attack against U.S. forces – but he did not say when.

“I will be happy, when the appropriate time comes in front of the proper committees and anybody else, through history and every — I'll stand by the intelligence I saw, that — that was compelling, it was imminent, and it was very, very clear in scale, scope,” Army Gen. Mark Milley told reporters on Monday.

U.S. government officials have repeatedly claimed that Soleimani, the former head of the Islamic Revolutionary Guard Corps, was in the final stages of plotting deadly attacks against U.S. troops when he was killed by an American airstrike. Yet no official has offered any proof to back up their assertion that killing Soleimani saved American lives.

The issue gets to the heart of the Defense Department's credibility, which has been strained by military officials' consistent over-optimistic assessments of progress in Iraq and Afghanistan, especially after the Washington Post published the “Afghanistan papers,” which showed top U.S. officials admitted privately that the military's strategy in Afghanistan was not working.

National Security Advisor Robert O'Brien last week declined to say what evidence the Trump administration has that Soleimani was planning such attacks.

“As far as intelligence on what his plans were and what the targets were, I'm not going to get into this at this point,” O'Brien said in response to a question from Task & Purpose on Jan. 3. “But at some point, that may be something we can discuss, but it's not something I can discuss at this time.”

Milley claimed that any doubts about the U.S. government's case for killing Soleimani are unfounded.

“I know that a lot of people are out there — I've seen words like, oh, the intel was razor thin,” Milley said on Monday. “Very, very few people saw that intelligence.”

“Did it exactly say who, what, when, where? No,” Milley continued. “But he was planning, coordinating, and synchronizing significant combat operations against U.S. military forces in the region and it was imminent.”

Yet the Trump administration continues to face requests to show hard proof that Soleimani was about to order his forces to strike U.S. troops. More recently, Secretary of State Mike Pompeo was asked on Tuesday “how imminent” the alleged attacks were.

Pompeo gave a rambling answer that did not actually answer the question. Instead, he recounted how Soleimani's actions that have resulted in “a massacre in Syria” and trampled on Iraq and Lebanon's sovereignty.

“And then we'd watch as he was continuing the terror campaign in the region,” Pompeo said at a State Department news briefing. “We know what happened at the end of last year in December, ultimately leading to the death of an American. So, if you're looking for imminence, you need look no further than the days that led up to the strike that was taken against Soleimani.”

“Then you – in addition to that – have what we could clearly see were continuing efforts on behalf of this terrorist to build out a network of campaign activities that were going to lead, potentially, to the death of many more Americans,” he continued. “”It was the right decision. We got it right. The Department of Defense did excellent work.”