A retiring Navy dog sniffed out bombs for 6 years. Last week he received a commendation

Bob the military working dog retired from the Navy last week after about six years of service, receiving the Navy and Marine Corps Commendation Medal in a Friday ceremony 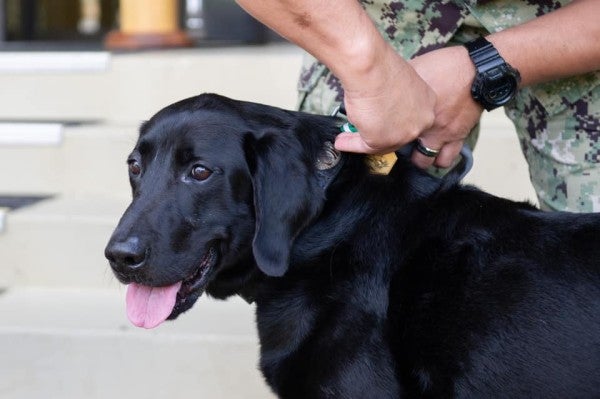 Wearing masks and standing 6 feet apart, they didn’t mind that their comrade Bob didn’t return their salutes. Or that he was on all fours.

Bob is a black Lab after all. And a very good boy.

Bob retired from the Navy last week after about six years of service as a military working dog. He was awarded the Navy and Marine Corps Commendation Medal at Friday’s ceremony.

“Bob’s just a big sweetheart,” said Senior Chief Petty Officer Mike Hausmann, who adopted him. “All he ever wanted to do was find bombs and catch a tennis ball.”

It’s unclear where Bob was born or how exactly he entered the service, but he originally worked as a Marine, Hausmann said.

Typically the military finds dogs by checking around kennels and looking for canines with the right traits, such as a penchant for hunting and going after balls, he said. Friendliness is also important because the dog will often be around new people.

Bob, who’s now 9 and “about 60 pounds of absolute cuddleness,” according to Hausmann, was trained at Lackland Air Force Base in Texas. Around 2011 or 2012 he deployed to Afghanistan and worked as a bomb dog, sniffing out explosives.

Eventually, Bob came to Hampton Roads and was moved around between the Norfolk Naval and Little Creek bases before landing at Oceana, Hausmann said.

He’s done presidential sweeps as well as searches ahead of visits from other high-ranking politicians and military officials.

“We use our bomb dogs pretty extensively whenever we're getting anyone of note on any installation,” Hausmann said.

At the Oceana kennel, Bob always quietly came up to people when someone entered, asking for pets — not jumping around loudly like some. “Then he’d just go back and lie down,” Hausmann said with a laugh.

The decision for him to be retired stemmed from the dog’s hip and lower leg issues, Haumann said. He can go on long walks just fine but jumping up and down or moving up high was becoming more painful.

Hausmann knew immediately he wanted to take him back to his Virginia Beach home.

“Bob is a dog after my own heart,” Hausmann said. “He likes his food. He likes to play out in the yard a little bit, but he really enjoys his spot on the couch.”

So far he’s getting along great with the two smaller dogs Hausmann and his wife Sherie already had.

Because of their training, military dogs require lots of physical activity. Hausmann said he often takes Bob for long walks.

In the backyard, the pup “likes to watch the ducks and the squirrels. He doesn’t chase them, he just watches. I think he’s done chasing stuff.”

Military dogs also have very strict diets, so Hausmann has eased him into Beggin’ Strips, which he now loves. Monday night was Bob’s first allowed onto the bed and it was “about 20 minutes of just rolling around” enjoying himself before he calmed down, Hausmann said.

“He’s just a big lovable goof. I’m really happy to have him at home and part of our family.”