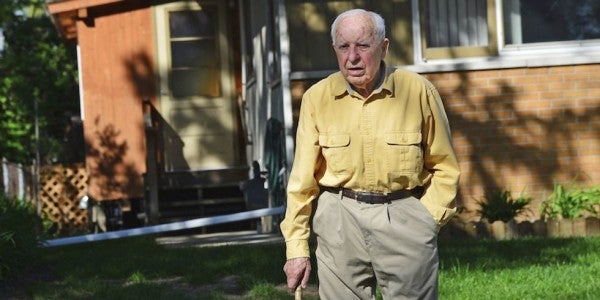 For decades, Michael Karkoc was a pillar of the Ukrainian community in northeast Minneapolis, a beloved neighbor and a leader of the local church, lending his carpentry skills to countless projects at St. Michael's and St. George's, a Ukrainian Orthodox congregation.

But his quiet retirement was shattered in 2013, when the Associated Press reported that he led a Ukrainian detachment serving under Nazi command in World War II that was accused of committing atrocities, a charge his family vehemently denied even as German and Polish prosecutors prepared cases against him.

Karkoc won't ever face those charges. According to a death certificate filed in Hennepin County, he died Dec. 14 in a Minneapolis assisted living facility at the age of 100.

Dr. Efraim Zuroff, the top Nazi hunter for the Los Angeles-based Simon Wiesenthal Center, said he believed Karkoc should have been extradited. He said it was unfortunate that Poland and the U.S. didn't move more aggressively to do so.

“They seem to have handled this case with a lack of urgency,” Zuroff said by telephone from Israel.

“This is a typical case of a person who joined forces with Nazi Germany and was involved in crimes against innocent civilians, and he didn't deserve the privilege of living in a great democracy like the United States,” Zuroff said.

The records established that Karkoc was a commander in the Nazi-led Ukrainian Self Defense Legion, which attacked a Polish village where dozens of women and children were killed in 1944, then lied to American authorities to get into the U.S. in 1949.

The family wanted to sue the news organization, he told the Star Tribune in a 2015 interview, but Michael Karkoc couldn't mount legal action because he had Alzheimer's disease.

“I would like to get these people in a court of law to inflict the pain we have gone through,” Andrij Karkoc said.

Reached by phone Tuesday, Andrij Karkoc declined to comment, other than to assail “the trumped-up charges that the AP created.”

Born in Ukraine, Michael Karkoc came of age in a region that was divided, part of it ruled by Russia and part by Poland. In 1941, Nazi Germany invaded the country. In his memoir, Karkoc said that in 1943, he helped found the Ukrainian Self Defense Legion, a group that aspired to Ukrainian independence and collaborated with the Nazis' SS troops on the Eastern front.

But a longtime friend, Antin Semeniuk, said Karkoc told him he hadn't been a Nazi. Rather, Semeniuk said, Karkoc described himself as a Ukrainian patriot who wanted his country to be democratic and free of Nazi and Communist rule.

Karkoc is beyond human judgment now, said Steve Hunegs, executive director of the Jewish Community Relations Council for Minnesota and the Dakotas.

“God, history and the facts will judge,” Hunegs said Tuesday.