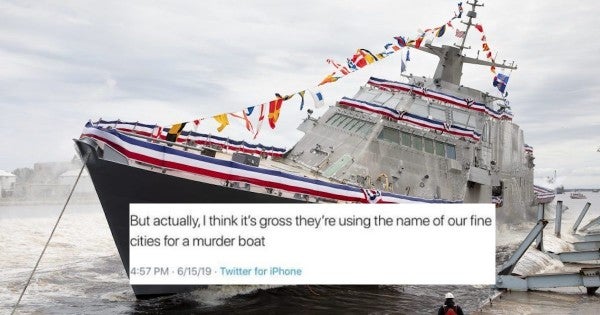 “Certainly, the disrespect shown is beyond the pale,” said Walz, who served in the Army National Guard.

William Davis, who has been the DFL Party's research director and deputy communications director, made the controversial comment in response to a tweet about the launch of a new Navy combat ship in Wisconsin: “But actually, I think it's gross they're using the name of our fine cities for a murder boat,” Davis wrote on Twitter over the weekend.

He later posted on social media, “I have nothing but respect for all the soldiers of our country, including the Navy which my Grandpa and 5 uncles served. It should go without saying that I was talking about a weapon of war that we continue pumping billions of dollars and manpower into.”

Walz, speaking to reporters Tuesday, added his outrage over Davis's original tweet, saying “There are those that use the military for political points on this, and this is not the place to express your opinion when it comes to the christening of a ship that will have our naval personnel on it.”

When asked whether Davis should be suspended, Walz declined to comment on a human resources issue. But he added, “Not as governor, but as a veteran and Minnesotan — not acceptable.”

The DFL has removed Davis from the communications role, but he will continue as research director.

“I would like to offer my sincere apologies for the tweet sent by one of our employees. It was unacceptable and does not reflect my own feelings or those of the Minnesota DFL,” DFL Party Chairman Ken Martin said in a statement. “The staffer who sent the tweet has apologized and deleted his Twitter account. Going forward, he will no longer be engaging in public-facing communications on behalf of our party.”

Minnesota Republican Party Chairwoman Jennifer Carnahan called the tweet “abhorrent” and said in a statement that it is disappointing to have people minimize the work of the military. She noted this is the second time in a year that Davis's social media posts have caused problems.

He was previously suspended for a week without pay after a tweet about bringing Republicans “to the guillotines” following Election Day.