The improper installation of a UH-60L Black Hawk engine’s hydromechanical unit was at fault in the December accident that killed three members of the Minnesota National Guard, according to a summary of an investigation 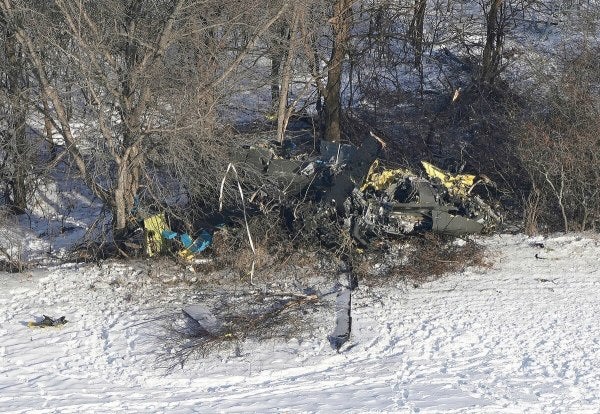 The improper installation of an engine’s hydromechanical unit was at fault in the December helicopter accident near St. Cloud that killed three members of the Minnesota National Guard, according to a summary of an investigation released Wednesday.

The three-man crew — a maintenance test pilot, a pilot and an aircraft mechanic — was conducting a routine maintenance flight southwest of the St. Cloud Regional Airport on Dec. 5 when the first engine failed. The second engine of the UH-60L Black Hawk helicopter was in the idle setting, so the failure of the first engine caused a dual engine-out condition, and the helicopter hurtled toward the ground near trees that lined a snowy Stearns County farm field.

The investigation summary revealed multiple factors that led to the accident. Two were from before the helicopter took off: The hydromechanical unit was incorrectly installed in the first engine, and the inspection of the hydromechanical unit’s installation wasn’t conducted according to proper procedure.

Other factors happened in the air, after the first engine failed. “The Maintenance Test Pilot failed to respond to a critical situation during a maintenance maneuver,” the report stated. “The pilot on the controls failed to execute an autorotative descent and landing.”

Furthermore, the report indicated leadership decisions led to the crash.

One of the three crew members — the aircraft mechanic — should not have even been on the flight.

And the report also said that “leaders did not adequately assess the technical inspector’s ability to perform his duties while pending administrative actions.”

“It is critical for us to determine what caused this tragic loss of life — not so that we can place blame, but so that we can do everything possible to ensure nothing like this ever happens again,” Brig. Gen. Sandy Best, interim Adjutant General of Minnesota National Guard, said in a statement.

All three soldiers were assigned to Company C, 2-211th General Support Aviation Battalion, based in St. Cloud. They had returned in May 2019 from a nine-month deployment to the Middle East, where they conducted medical evacuations in support of Operation Spartan Shield and Operation Inherent Resolve.

The families of the deceased received separate, individual briefings on the investigation, and all three asked for privacy, the Guard said.

“We continue to grieve with the families of these fallen soldiers and the aviation community, and the extended Guard family during this extremely difficult time,” Best said. “We hope the conclusion of this investigation and its findings will help to bring them closure and peace.”