A much-anticipated test of the nation’s homeland missile defense system succeeded Tuesday, when a rocket launched from the Santa Barbara... 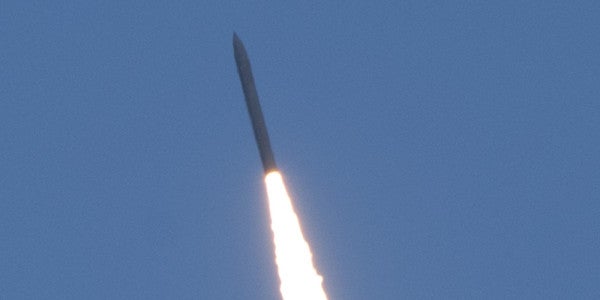 A much-anticipated test of the nation’s homeland missile defense system succeeded Tuesday, when a rocket launched from the Santa Barbara County coast hit and destroyed a target warhead fired into space from across the Pacific Ocean, U.S. officials said.

The launch, from Vandenberg Air Force Base, unfolded in the early afternoon under foggy conditions. The target missile was launched from thousands of miles away, at Kwajalein Atoll in the Marshall Islands.

“This system is vitally important to the defense of our homeland, and this test demonstrates that we have a capable, credible deterrent,” Syring said in a statement released by the agency. “I am incredibly proud of the warfighters who executed this test and who operate this system every day.”

The statement continued: “Initial indications are that the test met its primary objective, but program officials will continue to evaluate system performance based upon telemetry and other data obtained during the test.”

The towering rocket was launched from an underground silo about 60 miles northwest of Santa Barbara in the latest test of the nation’s troubled homeland missile-defense system.

The test was conducted amid stepped-up concerns over the security threat posed by North Korea. Under leader Kim Jong Un, North Korea has detonated underground nuclear devices three times in the last five years and has greatly accelerated its testing of ballistic missiles.

On Monday, a North Korea test missile flew about 280 miles before landing in the Sea of Japan — the 12th missile reportedly launched this year by the Pyongyang government. A Japanese government official told reporters the launch was “extremely problematic in terms of safety of aircraft and ships.”

North Korea’s actions have helped to focus attention on Tuesday’s test of the U.S. Ground-based Midcourse Defense system, which has cost taxpayers more than $40 billion to date.

The test was the system’s first attempted intercept of a target missile in nearly three years. Syring has told Congress that the test would be the system’s first pursuit of an “ICBM-range target,” flying at speeds closer to what the U.S. might confront in an actual attack.

The GMD system is intended to protect America from a limited-volume nuclear-missile strike by a non-superpower, such as North Korea. The system has 36 operational rocket-interceptors — four at Vandenberg and 32 at Fort Greely, Alaska, according to a Missile Defense Agency spokesman. The agency plans to increase the fleet to 44 by year’s end by adding interceptors at Fort Greely.

The system has been plagued by engineering-related problems.

Since GMD was made operational in 2004, the interceptors have failed to hit and destroy target warheads in 6 of 9 flight tests. The missile agency lists one of those six, conducted in September 2006, as a success. But the Pentagon’s director of operational testing and evaluation, J. Michael Gilmore, informed Congress that his office’s analysis found that, although the interceptor made “glancing” contact with the target, it failed to destroy it.

The test failures have occurred even though the exercises were scripted for success in ways that could not be expected in battle, according to present and former military officials and other specialists.

For example, operating personnel have known when the targets would be launched, as well as their size, speed and approximate trajectory. All but one of the flight tests dating to 1999 have been conducted during daylight hours, instead of under more difficult nighttime conditions. That single nighttime test ended in failure.

GMD has yet to be tested against realistic decoys, which would challenge the system’s ability to discern between decoys and nuclear warheads.

Defense officials have attributed the test failures to a variety of technical causes. In its most recent annual report, in January, the Pentagon test office rated both the reliability and day-to-day readiness of the GMD interceptors as “low” and said that testing had revealed unspecified “new failure modes.”

A year ago, the Government Accountability Office, the nonpartisan investigative arm of Congress, said that GMD’s test record had been “insufficient to demonstrate that an operationally useful defense capability exists.”

In interviews, missile specialists have pointed to the George W. Bush administration’s rushed deployment of GMD 13 years ago — and the exemption of the missile agency from standard Pentagon procurement and testing requirements — as fundamental errors that shortchanged engineering rigor and continue to undermine the system’s reliability.

GMD’s mission presents a profound engineering challenge, often likened to hitting one speeding bullet with another.

The system’s interceptors are 60-foot-tall, three-stage rockets, each tipped with a 5-foot, 150-pound “kill vehicle.” Once in space, the kill vehicles are designed to separate from their boost rockets and fly independently toward their targets, at speeds up to 4 miles per second. With the help of on-board navigation systems, the kill vehicles, which carry no explosives, are supposed to crash into and destroy enemy warheads using only kinetic energy.

The kill vehicles are tremendously complex machines, each composed of more than 1,000 components. Because of the rush with which they were produced and deployed, no two are identical, making it tougher to install timely updates and make necessary repairs.

The missile agency has also sought to overcome problems involving divert thrusters. These small rocket motors — four of which are attached to each kill vehicle — are supposed to fire rapidly once the kill is flying on its own in space to make crucial course corrections.

The thrusters’ rough combustion of fuel has been blamed for throwing off the kill vehicles’ sensitive guidance system. A costly redesign produced a new version, called the “alternate divert thruster.”

In January 2016, the missile agency launched an interceptor from Vandenberg to “fully flush out and fully test” the new thrusters, in Syring’s words. In that exercise, the kill vehicle was supposed to make a close fly-by of a target in space.

The missile agency and its lead contractors all pronounced the test a success. But as the Los Angeles Times disclosed last July, one of the new thrusters stopped working during the test, and the kill vehicle veered far off its course. A review overseen by the missile agency found that the thruster “most likely” malfunctioned because of a glitch in the electronic circuit board that powered it.

The test conducted Tuesday — which the missile agency’s spokesman, Christopher Johnson, said would cost $244 million — marked the first time the alternate divert thrusters were used in an attempted intercept. The new thrusters were attached to a slightly revised model of kill vehicle, called a CE-2 Block 1, which also made its first flight.

At the same time, North Korea has not yet tested a missile that has traveled more than a few hundred miles — well short of the distance to Hawaii, Alaska or the continental U.S. To reach Los Angeles, a missile launched from North Korea would have to fly about 5,800 miles.