After an intense two-day search, local military forces Friday recovered the body of a U.S. Army commando who was inadvertently... 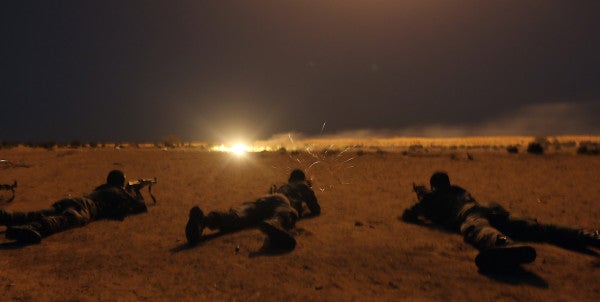 After an intense two-day search, local military forces Friday recovered the body of a U.S. Army commando who was inadvertently left behind after a daylight ambush by militants killed three other Green Berets in a rugged border region in Niger.

Pentagon officials had not previously announced that a Green Beret was missing in action after the surprise attack on a joint patrol of U.S. commandos and Nigerien troops Wednesday. Six of the 12 Americans on the patrol were killed or wounded.

Officials hoped the missing U.S. Army Special Forces operative might still be hiding in the dense brush, rather than taken captive, and launched a massive search-and-rescue mission with aerial drones and other aircraft, as well as Nigerien ground forces.

The death of four Green Berets in remote West Africa marks the worst single loss of U.S. forces under fire since President Donald Trump took office. The president was briefed on the search and the discovery of the body, officials said.

The casualties came as a heavy blow to the insular special operations community that increasingly shoulders the burden of America’s counterterrorism operations overseas. The four fatalities, as well as two wounded Green Berets, were in the 3rd Special Forces Group based in Fort Bragg, N.C.

Officials did not release the name of the Green Beret whose body was found Friday. It wasn’t immediately clear if he was killed in the firefight or died later.

According to the Pentagon, the Special Forces Operational Detachment Alpha, otherwise known as an “A-Team,” went on a routine patrol Wednesday afternoon with about 20 troops from the Niger Armed Forces when they came under heavy fire.

Officials said a barrage of machine gun fire and rocket-propelled grenades from about 50 militants forced the U.S. and Nigerien troops into defensive positions near the border with Mali. The fire peppered the troops’ trucks and shattered windows before they could regroup and fire back.

The soldiers called in support from French attack helicopters and fighter jets. It’s not clear whether the aircraft fired.

Amid the chaos, the officials said, one of the 12 Green Berets was left behind in a border region notorious for drug smuggling, human trafficking and myriad extremist militias, including allies of al-Qaida and Islamic State.

The other Green Berets only noticed his absence after they had pulled back.

Col. Mark Cheadle, spokesman for U.S. Africa Command, which oversees U.S. military operations on the continent, said commanders are reassessing whether U.S. forces on patrol are properly supplied to defend themselves.

“We are re-evaluating,” he said. “This was not expected. This was clearly something that, had we anticipated this sort of attack, we absolutely would have devoted more resources to it to reduce the risk.”

Cheadle said the patrol had planned to talk to local leaders about security. He said the military has no indication that someone tipped off the militants to set up an ambush in the brush.

“It would’ve been easy to have good concealment in this terrain,” he said, adding that an unarmed surveillance aircraft was overhead, but no armed air cover because the threat was considered “unlikely.”

The deadly attack drew attention to the little-known U.S. military presence in Niger, an impoverished desert country in Francophone West Africa. About 800 U.S. personnel are deployed there.

Niger is considered strategic for U.S. counterterrorism operations. It lies between Nigeria to the south, where Islamic State affiliate Boko Haram has been fighting to establish Islamist rule, and Mali to the west, where multiple extremist militias are active.

In all, U.S. special operations teams are deployed in 124 countries to train, advise and assist friendly forces, although most are focused in Africa and the Middle East.