Those Ridiculous Smart Glasses From ‘Mission: Impossible II’ Are Finally Here, But They Won’t Get You Laid

'Mission: Impossible II' was not a good movie, but it did help give post-9/11 Hollywood an enduring vision of the military smart glasses 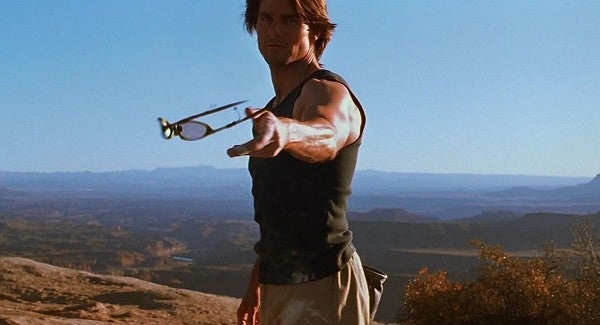 Mission: Impossible II was not a good movie, but it did help give post-9/11 Hollywood an enduring vision of military smart glasses.

Highly useful and ridiculously sleek, this stylish heads-up display comes in the form of a pair of Oakley Romeos — the type of shades perfectly suited to be applied and them removed in dramatic fashion — delivered by shoulder-mounted rocket and self-destructing within five seconds. They are extremely expensive and useful for 30 seconds, tops, perfectly suited for the high-octane 2000 cinematic train wreck that would have been more appropriately entitled 2 Mission 2 Impossible.

They are the dumbest shit I've ever seen.

Dumb, but instructive. The Army has been testing helmet-mounted “Tactical Augmented Reality” displays for years, and with the global AR and virtual reality smart glasses market is expected to balloon to somewhere around $31 billion in the next five years, according to MarketWatch, sleek military-grade smart glasses may be just over the horizon for modernizing infantry forces around the world.

If you're looking for an idea of what your next tactical eyewear might look like, just consider the Blade smart platform unveiled in Singapore by ST Engineering and Vuzix Corporation on Monday.

The Blade's capabilities include “real-time cross-referencing against a central database of criminal offenders and displaying route maps to criminal suspects in the vicinity” — the essential functions of every fictional heads-up display you've ever seen. Indeed, the Army's TAR demo focused primarily on situational awareness and target ID:

All of this may seem super exciting to the average grunt, but there's a catch, of course: Based on Blade, it looks like the next generation of tactical eyewear will resemble a familiar piece of standard-issue infantry gear: the infamous birth control glasses.

So if you're hoping to get that extra Ethan Hunt swagger, bad news — the only thing guaranteed to self-destruct in five seconds is your game.