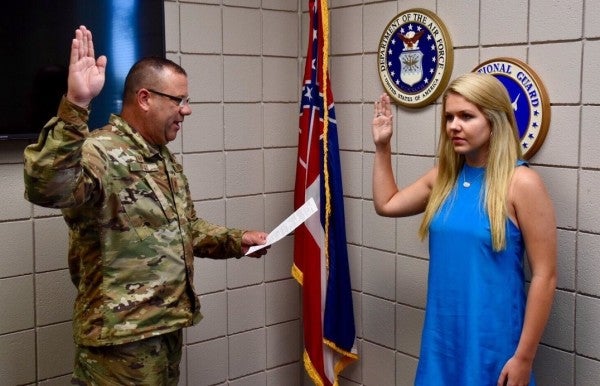 A Mississippi beauty queen with dreams of becoming pilot died in a fiery crash after the single-engine plane she'd been operating plunged into a golf course near a small airport owned by a nearby university.

No one on the ground was injured, but Little suffered serious burns in the crash. She was airlifted to a Memphis-area hospital, where she died from her injuries later the same day.

Little, a recent graduate of Starkville Academy, enlisted in the Mississippi Air National Guard in June and planned to be a C-17 loadmaster, a National Guard spokesperson told the Clarion-Ledger.

“America she loved you! She loved you so much she enlisted in the National Guard! She was so proud to take her oath just a few weeks ago to serve her state and country,” her brother, Layton Little, wrote in a tweet.

“She might not have held a title for our military, but she was a true General for the Lord. I am so proud.”

Little was also slated to compete in the Mississippi Miss Hospitality Competition later this month, according to the competition's Facebook page.

“The loss of such a bright, young life is devastating, and our entire organization is heartbroken. Our thoughts and prayers are with the Little family and countless other impacted by Lake's sweet and beautiful spirit,” the pageant said in a statement.

“Through her grace, intelligence, and passion for her community and state, Lake epitomized the highest virtues of Miss Hospitality. Her light will forever shine as an incredible example to all of us.”

WATCH NEXT: When Booty Calls