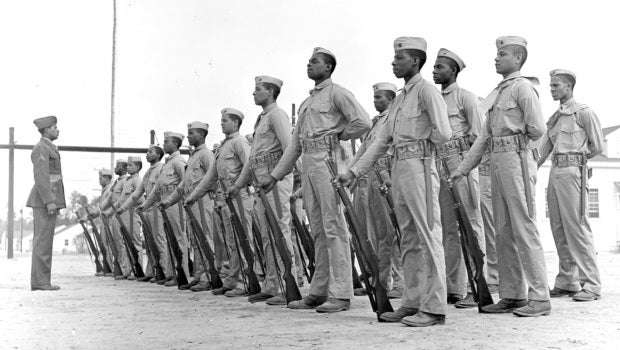 Brenda Matthews heard about Black Marines who served at Camp Lejeune’s Montford Point Camp during and right after World War II being awarded the Congressional Gold Medal, and she wanted the same thing for her father, Gunnery Sgt. Charles Shaw, who died Oct. 29, 1979, at 62.

On Saturday, Oct. 10, Matthews, of Anaheim Hills, her five siblings, family and friends gathered at Friendship Baptist Church in Yorba Linda. In a long-awaited ceremony, Matthews finally got what she had been waiting so long for when retired Marine Staff Sgt. Mike Johnson, the Montford Point Marine Association’s national vice president, laid a bronze replica of the gold medal in her hands and read the official citation.

The medal – about 3 inches in diameter and 1/4 inch thick – is engraved with three Black Marines’ faces. On the back, it reads: “For outstanding perseverance and courage that inspired social change in the Marine Corps.”

“It’s like a dream come true,” said Matthews, 71. “It’s like I can take a deep breath. All these years, I wanted him to be recognized when I realized how important it was. All that comes full-circle now.”

On Veterans Day, Shaw’s medal will be displayed at the Bowers Museum in Santa Ana to recognize his and all other Montford Point Marines’ service. The Congressional Gold Medal is the nation’s highest civilian award.

The Black Marines arrived in Montford Point in 1942 after President Franklin D. Roosevelt issued Executive Order 8802, which prohibited racial discrimination in the services.

By 1949, nearly 20,000 Black Marines had gone through boot camp there while White Marines trained at Parris Island, N.C. and San Diego. At Montford Point, the men were housed in spare huts and only allowed on the main base of Camp Lejeune if a White Marine escorted them.

The original intent was to discharge the Marines after the war, but so many proved themselves and in July 1949, President Harry Truman issued Executive Order 9981 negating segregation. That September, Montford Point was deactivated. The camp was renamed Camp Johnson after Sgt. Maj. Gilbert “Hashmark” Johnson, one of the first Blacks to join the Marine Corps.

Montford Point Marines fought in the Pacific, with Okinawa being their biggest battle, even while they were victims of racism and segregation.

But the Montford Point Marines were never recognized as other famed Black units were, such as the Tuskegee Airmen and the Buffalo Soldiers.

Shaw, originally from Elgin, Tex., and a high school teacher, enlisted in the Marine Corps and was sent to Montford Point in 1946, where he later became one of the senior drill instructors. In 1949, when the camp was closed, Shaw became the first Black drill instructor at Parris Island in the new non-segregated Marine Corps. Shaw later served at Camp Pendleton and then at Marine Corps Logistics Base Barstow. He retired from active duty in 1963 and remained in the Marine Reserves until 1973.

While still in the service, Shaw and his partner, Jim Jones, opened Shaw’s BBQ pit in Santa Ana in 1956. Known for its potato salad, sweet potato pie and homemade sausage, it became a community gathering spot.

Tracking down the medal

Matthews first learned of the medal after retired Gunnery Sgt. John Smith, who also goes to her church, went to Washington, D.C. in 2012. He and 400 others were the first Black Marines to receive the gold medal.

The ceremony in D.C. was held after President Barack Obama, on Nov. 23, 2011, signed a law to award the medal to all Montford Point Marines after congressional approval.

In August 2012, nine more Montford Marines from Southern California were honored in a Camp Pendleton ceremony and given their medals. The ceremony was overseen by then Major Gen. Ronald Bailey, the first Black commander of the storied 1st Marine Division.

“People in the church made a big deal about it,” Matthews said, recalling how after Smith’s award, she heard about others getting the medal posthumously. “I thought my dad should have it too.

“That’s what he talked about all the time,” she said, “if I didn’t know anything else about my dad, I knew he was a Montford Point Marine.”

She recalled being a young child living in North Carolina and being taught her father’s pride and discipline.

“All of his children felt like they were in the Marines,” she said. “When I went to school, every morning, he inspected my clothing. My shoes couldn’t be dirty. I’d say, ‘Daddy, I’m ready,’ and he’d spin me around. It was a daily routine and I felt proud I pleased my dad and I felt proud I’d accomplished my first task of the day.”

Matthews heard of more medal presentations. Then one day, about three years ago, she took action and contacted Robert Bentley, who heads up the veterans’ ministry at her Yorba Linda church.

Bentley connected her with Johnson, of Fontana, who, as part of the Montford Point Marine Association, embarked in 2005 on a tireless mission to get the Marines recognized.

Johnson, who last served at Camp Pendleton in 1996, said he first learned about the Montford Point Camp a few years after enlisting in the Marine Corps in 1972.

“I got sent to Camp Johnson and when I walked around, I kept seeing all these signs saying Montford Point Camp,” he said. “I couldn’t understand why the buildings were so old. Then I realized the story behind it and that it was a boot camp for Black Marines.”

Throughout his service, Johnson said he never forgot about the camp and the service of those Black Marines.

Johnson has tracked down 50 veterans or their families.

He comes across them in all different ways. Some he meets at the VA, others he contacts their families. Almost always families are unaware of the awaiting opportunity.

“Many Montford Pointers never talked about it, so their families never knew,” he said.

Finding those still alive is critical.

“If it weren’t for them, I wouldn’t have been able to join the Marine Corps,” he said. “I want to personally thank them for what they did and what they went through. I feel the hardship they went through. When you’re talking to a 90-year-old and you’re 60, and we both had that feeling, you can’t bond any more than that.”

“This has been my whole life,” he added. “I had no intention of doing this, but sometimes there is a calling.”

Retired Staff Sgt. Dave Culmer, of Los Angeles, was among those on Saturday paying his respects to Gunny Shaw.

“He was hard and fair,” said Culmer, who just turned 89 and was one of Shaw’s recruits. “He was a demon at his job. He wanted the Marines to make it. He knew when they got out of boot camp, they’d be in the traditional White Marine Corps and he wanted to make sure they measured up.”

Culmer, originally from Philadelphia, said he was inspired by a White Marine he often saw in his neighborhood. He said he still recalls the vision of that man wearing his dress blues. One day, when Culmer and his mother were in a neighborhood store, they stood next to the Marine and Culmer remembers touching the hash marks on his sleeve.

“He felt something touch his sleeve and he moved his arm, but when he saw it was a child, he put it back down,” Culmer said. “He was blonde, blue-eyed and straight as a stick. He was impressive to me.”

Related: Former DIA Director: Please, take your knee off our necks so we can breathe

Culmer enlisted on March 28, 1949. But, at the recruit depot, he was told he could only go in as a steward, meaning he would serve officers in the wardroom or bachelors quarters. That wasn’t what he had in mind. He wanted to be something more.

When he got to Montford Point, life wasn’t easy.

“The head and shower were 75 yards from the barracks,” he said. “The barracks were cinder block-framed buildings with pointed wooden roofs. There were two potbellied black stoves, that was the heat.”

One of his jobs was to get the drill instructor’s stove heated before “his feet hit the floor.”

“We had two pairs of dungarees,” Culmer said. “We had to wear one and wash one.”

That meant he’d have to put on damp clothes in the morning, but by the time 8 a.m. hit, he said his clothes would be dry – but he’d get a reaming because they were filthy from collecting the coal.

“There were no excuses at Montford Point,” he said. “The only thing worse than Montford Point was not to finish and Sgt. Shaw reminded me of that.”

He did finish and went on to have a 20-year career in the Marine Corps, retiring in 1972. In 1959, Culmer became the first Black helicopter crew chief in the corps when he served at the El Toro air station.

To this day, Culmer said he credits Shaw for his own success.

“When we got out of boot camp, we were totally squared away and immaculate,” he said. “We were better than most guys.”

Culmer, too, was among the first group of Montford Point Marines to receive the medal in Washington, D.C.

“I cried,” Culmer said. “A general hung the medal around my neck. I used to tremble when I saw a general.”

And, for Shaw, Culmer said Saturday’s recognition is a tribute to the man he was.

“It’s just an inkling of the character of this man,” he said. “I think the kids can attest to the stature of their father. This is an added tribute.”