Monthly Stipends Delayed For 11,000 Disabled Vets Because Of A ‘Glitch’

There are a lot of perks to joining the military: There’s that sense of pride you feel after saving ‘Merica... 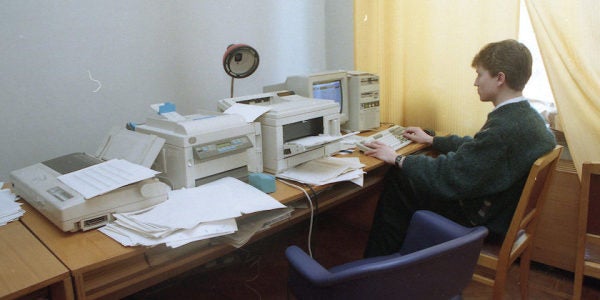 There are a lot of perks to joining the military: There’s that sense of pride you feel after saving ‘Merica from nefarious evil-doers; the chance to look muy Rico Suave in a sporty dress uniform; and, of course, all those heard-earned Veterans Affairs bennies.

The same bennies that thousands of disabled veterans missed out on last month due to technical difficulties, the Washington Post reported Feb. 2. Some 11,000 veterans enrolled in the departments Vocational Rehabilitation and Employment (VR&E;) program had their subsistence allowance payments delayed because of a “computer glitch.” The VR&E; program matches severely disabled veterans with employers, internships, and pays for college credit.

The Washington Post, which broke the story, cited an internal memo it obtained from the VA advising employees to apologize to vets impacted by the tech error and to assure them their pay was on the way. Said payments should have gone out on Jan. 31, but were delayed until Feb. 6.

Sure, having the government send out a late paycheck while you’re enlisted and living in the barracks sucks; it’s a bit different when you’re an injured vet, going to school, working a job, and juggling those responsibilities with family life and bills.

“Any large bureaucracy has their glitches, but anytime veterans are not getting their benefits on time, especially when on a program like this, it’s a real hardship,” Garry Augustine, the executive director of Disabled American Veterans, told The Washington Post.

This is hardly the first time the VA has had computer issues. In late November, the long-awaited veteran ID card program hit a snag when the website crashed, and would-be users became trapped in a hellish merry-go-round of browser errors that led nowhere. (Task & Purpose covered this experience previously.)

Fortunately, the VA has “already identified the source of the problem and fixed it so it does not occur again in the future,” Curt Cashour, the department’s press secretary told Task & Purpose.

Which is good, because I can’t imagine it was a great week for the IT folks when 11,000 understandably disgruntled veterans began calling to inquire about their delayed payments, or how that conversation went when they were told “your check is in the mail.”