How the Apollo program turned military pilots into geologists

The early Apollo missions were focused on beating the Soviets to the moon to prove America's technological superiority during a fraught period in the Cold War, and the astronauts who flew them were mostly pilots with little interest in rocks. 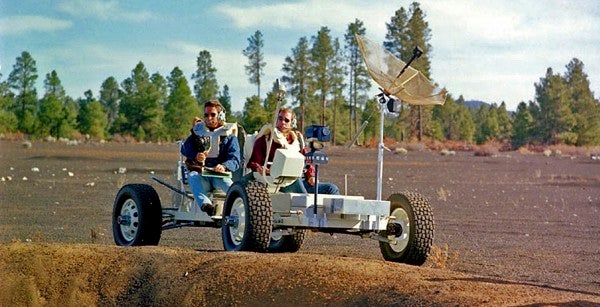 Step through the Cinder Lake Crater Field roughly 12 miles outside Flagstaff, Ariz., and you might encounter a white crystal-filled rock that has absolutely no business being there.

The chunks of anorthosite weren't deposited there by nature — they were trucked in from the mountains around Pasadena, Calif. And the craters were carved not by meteors, but by fertilizer and dynamite.

Before the first man landed on the moon, NASA dispatched the Apollo astronauts to this volcanic field to search for these and other faux moon rocks.

The scavenger hunt had great purpose: Anorthosite would likely be among the oldest lunar fragments, geologists believed, and they wanted to make sure the moonwalkers could identify the valuable specimens to bring home.

“We drilled that into the Apollo 15 crew,” said Gerald Schaber, a retired geologist with the U.S. Geological Survey who helped with the training. “That's the kind of efforts we went to.”

The early Apollo missions were focused on beating the Soviets to the moon to prove America's technological superiority during a fraught period in the Cold War, and the astronauts who flew them were mostly pilots with little interest in rocks.

But by the time Apollo 11 blasted off, many astronauts had come to develop an appreciation for lunar geology — and the new light it would shed on our own planet. “Geology opened my eyes to the immensity of time,” Edwin “Buzz” Aldrin wrote in his 1973 book, “Return to Earth.”

This 1968 photo shows craters being created in a volcanic cinder field east of Flagstaff to mimic a particular patch of the moon's surface.
(U.S. Geological Survey Astrogeology Science Center via Associated Press)

Northern Arizona became the hub of this crash course in field geology thanks in part to Meteor Crater, a nearly mile-wide wound in the desert less than 40 miles east of Flagstaff.

The crater caught the eye of USGS geologist Eugene Shoemaker, who dreamed of going to the moon but was disqualified by a diagnosis of Addison's disease, an adrenal gland disorder. Instead, he did his best to turn NASA's astronauts into scientists and persuaded the space agency to send nine of them to Arizona for field training.

Shoemaker took the astronauts out in January 1963. Over the two-day trip, they visited Meteor Crater to see a natural analogue for the moon's pockmarked surface, then headed northwest to Sunset Crater to examine different kinds of volcanic features before returning to Flagstaff to see how those features were depicted on maps at Lowell Observatory.

“They were able to see, and really able to learn, a lot about geology,” said Kevin Schindler, the observatory's historian.

Still, some of the astronauts were a bit cynical about looking at rocks.

“Their job was to get to the moon to beat the Russians. What did science have to do with accomplishing that?” Schindler said. “So the geologists who were going to train them were like, 'If we're going to inspire them to really do science, we need to take them to one of the most inspiring places in the world.' “

So they visited another northern Arizona landmark: the Grand Canyon.

Scientists led the astronauts down the Kaibab Trail, stopping along the way to describe the different rock types they saw and explain how they got there. They spent the night on the canyon floor and climbed up Bright Angel Trail the next day. On the way up, the astronauts identified and discussed the geological features themselves.

By the time they were done, they had learned that rocks could tell a story that was billions of years in the making. Both Aldrin and his Apollo 11 crewmate Neil Armstrong spoke highly of the experience.

“I found myself standing at the bottom of the Grand Canyon paying rapt attention as the instructor talked about things that place eons before man existed on this earth,” Aldrin wrote.

Meanwhile, the geologists were doing a little learning of their own. The moon has only one-sixth the gravity of Earth, so swinging a geology hammer would feel very different. And in bulky space suits with unwieldy gloves, even an act as simple as picking up rocks could become a chore. So the scientists tested hammers, cameras, scoops and specialized rakes designed for extraterrestrial use.

The geologists conducted about 200 astronaut training trips between 1963 and 1972. “That's how busy we were,” Schaber said. “We had a lot to do in that short period of time. It was unbelievable.”

On those trips, astronauts practiced using their geological hammers, hand lenses and maps to identify telltale crystals in rocks. Most important, they learned how to quickly recognize what was “typical” on an unfamiliar landscape, then look for the oddities that stood out, said Laszlo Kestay, a research geologist at the USGS Astrogeology Science Center.

Some of those lessons must have sunk in. Once Armstrong and Aldrin exited the Eagle, they were observing the moon like bona fide scientists, Schaber said.

“They talked about the soil, how far the footprints were going in, what the soil looked like, what the rocks looked like,” Schaber said. “One of them even mentioned that it had a phenocryst in it, which is like a little crystal in the rock. Those terms came from us, from their training.”

Harrison “Jack” Schmitt, an Apollo 17 astronaut and actual geologist, said some of his NASA colleagues “threw themselves wholeheartedly in the whole thing,” according to an agency report.

There was even what Kestay called “a healthy level of competitiveness.” The astronauts had a “low-level rivalry about who can come back with the rock that the scientists are just completely losing their minds over,” he said.

Some astronauts chose to do extra science training in their free time. California Institute of Technology geologist Lee Silver — an architect of the anorthosite exercise — persuaded Apollo 13 astronauts Jim Lovell and Fred Haise to take a field trip with him to the Orocopia Mountains in Southern California. They agreed, paying their own expenses and using their vacation time.

For about a week, the astronauts worked from dawn until dusk, carrying all their water and forgoing showers.

“I did two important things: I created some exercises for them, and I cooked,” Silver recounted in an oral history. “They did several important things: They worked their butts off, and they washed the dishes. It was a successful exercise, and I made some good friends.”

The astronauts' evolving interest in the fieldwork mirrored the growing realization within NASA of the value of planetary science.

Even on Apollo 11, where there was real concern about distracting the astronauts from their primary goal of landing on the moon and returning safely, that interest couldn't be hidden, Kestay said.

“You go back and watch the tapes,” he said. After first checking under the lander for damage, “the very next thing they did was start picking up rocks.”

“That was the real benefit of taking the astronauts to see the most spectacular geology,” he added. “No human being can avoid getting interested when you start seeing these things like the Grand Canyon and Meteor Crater.”

That interest continues today, said geologist Lauren Edgar of the USGS Astrogeology Science Center, who is coaching astronauts who may fly to the moon with NASA's Artemis program, and perhaps on to Mars.

“It's really exciting that this current class is training at some of the same sites with the same objectives as they did in the Apollo era,” Edgar said. “That's really inspiring.”

This time around, trainees may test out tools such as handheld X-ray fluorescence spectrometers (to analyze the elemental composition of rocks) and flying drones (to help scout the terrain ahead of them).

And there will be another key difference, she said: The geologists won't have to persuade these astronauts that geology is interesting.