Virginia-class fast-attack submarines like the South Dakota, with a crew of about 135 sailors, are designed to operate in various depths, from deep ocean environments to shallow coastal waters 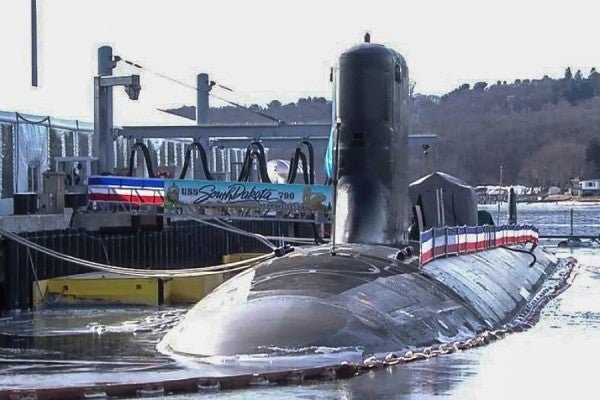 Hackley served as a radar operator on the USS South Dakota (BB 57), among the most decorated battleships of the war.

McFarland, known as a plank owner, is among the first to serve on the fast-attack submarine USS South Dakota (SSN 790), which was commissioned at the Naval Submarine Base before a crowd of about 1,400 people. Another 800 watched on a screen from nearby Dealey Center on base.

Virginia-class fast-attack submarines like the South Dakota, with a crew of about 135 sailors, are designed to operate in various depths, from deep ocean environments to shallow coastal waters. The submarines can perform a variety of missions, including surveillance and reconnaissance, as well as hunt and sink other submarines and surface ships. They can launch land-attack missiles, torpedoes and mines.

Deanie Dempsey, wife of retired Army Gen. Martin Dempsey, a former chairman of the Joint Chiefs of Staff, is the South Dakota's sponsor. Gen. Dempsey was in attendance Saturday, as were the couple's children and grandchildren, who were seated in the front row. Gov. Ned Lamont, in his first visit to the base, also attended the commissioning.

With the U.S. military strategy increasingly turning toward the world's oceans, the pace of submarine production has picked up. Over the next 20 years, it's estimated that nearly 30 more Virginia-class submarines will be built. Military officials frequently cite China's and Russia's efforts to seek dominance in their regions, and their pursuit of defense buildups aimed squarely at the U.S.

“Competitors seek to challenge us and challenge our dominance in the undersea. For that reason, I submit the nation must continue to build and maintain the finest submarines in the world,” Vice Adm. Charles A. “Chas” Richard said.

South Dakota's stealth will allow the submarine to travel the world's oceans undetected, “collecting information, preparing for battle and, if necessary, striking from the deep swiftly and without warning, to answer the nation's call,” Richard said.

The South Dakota took about five years to build. During that time, much changed at Electric Boat, which constructed the submarine with Newport News Shipbuilding. The workforce grew from 11,500 to 17,050, and more than half of the employees now are between the ages of 22 and 37, compared to 30 percent five years ago.

“The rise of the millennial generation emerging to lead Electric Boat's important work for the country, I believe, is a powerful rebuttal of cynics and naysayers that say that American manufacturing and technological excellence are a thing of the past,” U.S. Rep. Joe Courtney, D-2nd District, said during the commissioning ceremony.

The military also is seeing a generational shift, Courtney said, including the crew of the South Dakota. The crew's commanding officer, Cmdr. Craig E. Litty, said about 65 percent of the sailors have never served on a submarine before.

As Sen. Richard Blumenthal, D-Conn., put it: “This isn't your grandfather's submarine.”

The submarine is manned 24/7 and commissioning ceremonies are no exception. Twenty members of the crew were on board to keep watch over the boat during the ceremony.

SEE ALSO: The Navy Is Testing A Coating That Could Let Submarines Glide More Easily Through Water