A family crest gold ring was one of the last things Drew Langevin shared with his son Sean, who was... 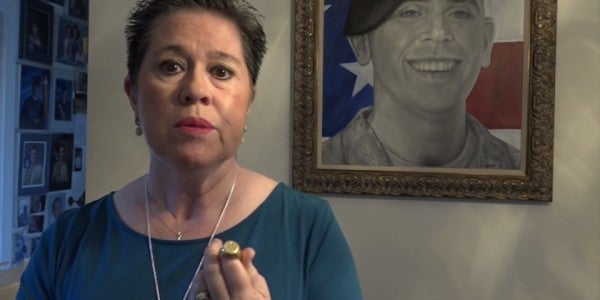 A family crest gold ring was one of the last things Drew Langevin shared with his son Sean, who was killed fighting in Afghanistan in 2007. On Christmas Day, Sean’s mom and Drew’s widow, Roxane, was crushed to learn it had been stolen from the mausoleum that houses Sean’s remains.

“It was Sean’s ring, but even more significant is that it’s something his dad did for Sean,” said Roxane Langevin, of Walnut Creek. “My husband would have just been devastated.”

Drew Langevin died in August 2015 after a long illness.

Contra Costa sheriff’s detectives are investigating the theft from the mausoleum at Queen of Heaven Cemetery in unincorporated Lafayette, which Roxane and other family members noticed and reported following a Christmas Day visit. It was taken from a “niche,” a small display space within the mausoleum that contains — behind locked glass — the urn containing Sean’s ashes, some photos, other mementos and the crest ring.

Cpl. Sean Langevin, a member of the U.S. Army’s 173rd Airborne Brigade, was 23 when he and five other American soldiers were killed in November 2007 in an ambush-style attack in the mountains of eastern Afghanistan about 40 miles from the Pakistani border. The 2002 graduate of Concord’s Ygnacio Valley High School left behind a new wife, an unborn daughter, a brother and his parents. He was interred, with full military honors, at Queen of Heaven.

The ring is 14-karat gold, and Roxane figures it’s worth $500 to $700 for whoever would be tempted to sell it, or worse, melt it down. For her, its worth cannot be measured.

“It’s more the sentimental value than anything,” said Roxane, noting that while several similar rings were made for family members, the one that was stolen has added meaning, given that Sean and Drew are now gone.

“It’s something that was connected to both of them,” she said.

Roxane Langevin has suffered through not only the deaths of her son and husband but also cancer treatments starting in 2011. The discovery of the missing ring on Sunday was also a huge blow, she said.

Queen of Heaven Cemetery is a ministry of the Roman Catholic Diocese of Oakland. Helen Osman, a spokeswoman for the diocese, said the mausoleums there lack security cameras, as well as electricity. “They’re always looking at how they can improve and enhance their security measures,” Osman said Thursday.

Currently, there are no suspects in the theft, Contra Costa County sheriff’s spokesman Jimmy Lee said.

Roxane Langevin, who was the keynote speaker at Walnut Creek’s 2014 Memorial Day ceremony, said, “All I ask is that the ring come back to us.”