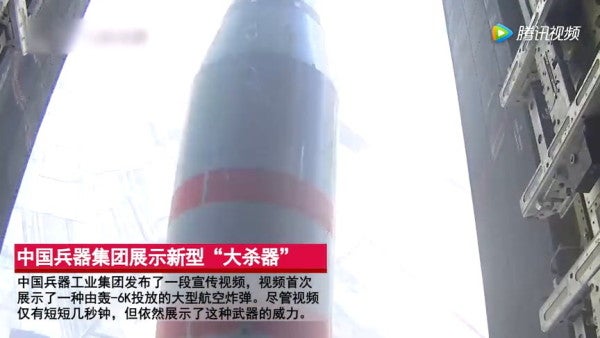 China's got a new bomb, and it's a really big one.

A major Chinese defense industry corporation has, according to Chinese media, developed a deadly new weapon for China's bombers.

Referred to it as the “Chinese version of the 'Mother of All Bombs,'” this massive aerial bomb is reportedly China's largest non-nuclear bomb, the Global Times explained Thursday, citing a report from the state-run Xinhua News Agency.

The weapon, said to weigh several tons, was developed by China North Industries Group Corporation Limited. A recent promotional video showed the weapon in action. The video, which was apparently released at the end of December, marked the first public display of this particular weapon.

Carried by the Chinese Xi'an H-6K bombers, which is a version of the older Soviet Tupolev Tu-16 bombers, the weapon almost completely fills the bomb bay, which would make it roughly five to six meters in length.

Indeed, massive airdropped bombs with tremendous destructive power play an undeniable role in psychological warfare, and not just through seismic shock. During the Gulf War, two US MC-130E Combat Talons dropped a pair of BLU-82 Daisy Cutters, the largest conventional bombs in the US arsenal at that time. A British SAS commando about one hundred miles away reportedly radioed to headquarters, “Sir! The blokes have just nuked Kuwait!”

The next day, a US aircraft dropped leaflets that read: “You have just experienced the most powerful conventional bomb dropped in the war … You will be bombed again soon … You cannot hide. Flee and live, or stay and die.”

Last year, while waging war against militants in Afghanistan, the US military dropped a GBU-43/B Massive Ordnance Air Blast (MOAB) weapon, more commonly known as the “Mother of All Bombs,” on the Islamic State.

Although China is using the same nickname for its bomb, the Chinese weapon is smaller and lighter than its American counterpart. Chinese media speculated that the size restrictions may have been intentional, ensuring the weapon could be dropped from a bomber.

The 11-ton US bomb is delivered by a C-130 Hercules transport aircraft.