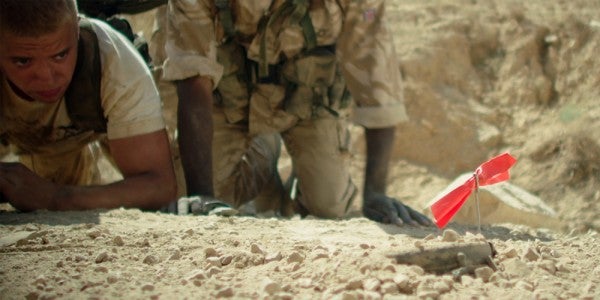 The small, but growing genre of post-9/11 war movies — dominated by massive hits like “American Sniper,” “Lone Survivor,” and “The Hurt Locker” — has a new addition coming to American audiences on Nov. 13: “Kilo Two Bravo.”

The film tells the harrowing story of a June, 6, 2006, ambush that went awry when British paratroopers became trapped in a minefield near the Kajaki dam, in Helmand province, Afghanistan. The events of that day resulted in five casualties and one death.

Directed by Paul Katis, the film was originally released in the United Kingdom in 2014 as “Kajaki” — its U.S. title comes from the unit’s callsign. While refreshingly light on politics, it’s impossible to divorce war from its political roots, and some of it bleeds over. When two soldiers see a three-legged dog climbing a ridge early in the film, one asks if there are mines.

“This country’s full of shit left behind when armies fucked off,” is the response. “Russians, it was the mines. Ten million fucking mines. God knows what we’re going to leave behind.”

It’s almost a matter of fact, briefly discussed and then discarded. The far-reaching effects of foreign policy aren’t likely to cross anyone’s mind when they’re deployed. One of the reasons “Kilo Two Bravo” feels so genuine is the casual way that past wars, and the legacy of current conflicts, are discussed, which is briefly if at all. I didn’t think about it when I was in Kajaki in 2011 because there were more pressing things to focus on, like the threat of improvised explosive devices, or in the case of “Kilo Two Bravo,” the Taliban and the Russian-made mines that are the lingering legacy of the Soviet-Afghan war.

After spotting what appears to be a Taliban checkpoint, a three-man team moves down a goat path from their observation post in order to maneuver on the enemy. As they cross into a narrow ravine, Lance Cpl. Stuart Hale, played by Benjamin O’Mahony, steps on a landmine.

The moment the patrol ventures into the valley everything changes and it’s in that instant that “Kilo Two Bravo” separates itself from more well-known war movies. There’s no melodramatic slow-motion shot of Hale stepping on the first mine, or any overly dramatic camera work. The scenes unravel in real-time, and as such, they are agonizing to behold. The men of the 3rd Battalion, Parachute Regiment, are trapped in that valley for hours, surrounded by mines and struggling to keep six seriously wounded men alive, as others are forced to look on. The camera frequently pans to the ridge where the audience sees the rest of the unit positioned defensively, powerless to aid their friends, lest they become another casualty.

The initial blast, which amputates Hale’s leg, sets in motion a series of injuries as other soldiers run to the aid of their wounded comrade. As Cpl. Stuart Pearson, played by Scott Kyle, makes his way out of the ravine, he sets off another mine, which amputates his leg and leaves him trapped in the open. When a Chinook arrives and tries to land, the backwash from its rotor blades causes another mine to detonate and shortly after that, a fourth and final mine explodes, leaving six men wounded and trapped.

At one point the unit’s medic, Lance Cpl. Paul “Tug” Hartley, played by Mark Stanley, throws his medical pack in front of him and leaps on top of it. He plays a deadly game of leapfrog as he makes his way across the killzone to the wounded. Every time Hartley takes a successful step forward, you can’t help but exhale with relief along with him.

The sparse dialogue and anxious waiting build the tension. The audience is made to feel powerless, which brings you fully into the story. You’re up there on the ridge, or down on the rocks next to the injured, watching as one man leaps toward his friends’ salvation, or his own demise.

“Kilo Two Bravo,” is a hard and brutal film that feels tailor-made for veterans of the wars in Iraq and Afghanistan, where the persistent threat of mines and improvised explosive devices transform every step into a leap of faith.

Starting Nov. 13, “Kilo Two Bravo” will play in select cities in the United States and be available on DVD and Video on Demand.