What could possibly go wrong? 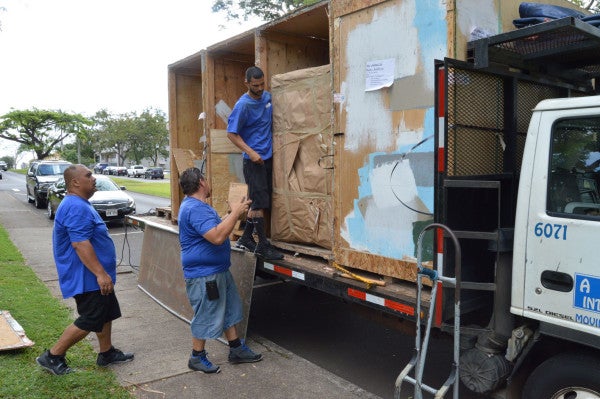 With the Defense Department pushing forward on outsourcing its military moving process, members of the moving industry are asking why the Pentagon is in such a rush.

U.S. Transportation Command in April posted a draft request for proposal to hire a single company to manage the system responsible for permanent change-of-station moves. According to the command, the DoD expects to issue a request for bids by June 21 and award the contract by Jan. 1, 2020.

Members of the International Association of Movers, or IAM, a trade group that represents moving companies, along with other industry advocates, such as the American Moving and Storage Association, want Congress to require the DoD to create a working group to study the measure before it goes any further.

“I'm not sure there's any single entity anywhere that has the potential to bid this contract,” said Charles White, IAM president. “Taking all of what is required and rolling it up under a single-source provider is incredibly risky.”

White said he'd like to see the changes made last year to the Defense Personal Property Program, or DP3, given the chance to work before the entire operation is outsourced.

Those changes include increasing the number of inspectors available to respond to issues, adding more crated shipments to better protect property and discourage theft, and giving service members access to satisfaction scores of companies.

TRANSCOM leaders have said these improvements will help families during the next two moving seasons before a private company takes over the process in 2021.

“This is untested. The plan hasn't undergone any kind of scrutiny. I believe it's U.S. TRANSCOM's wish to move to this type of procurement and they don't understand the ramifications,” White said.

During the most recent PCS seasons, military families reported numerous problems with their moves, from loss and breakage to theft and lengthy delays in transfer.

TRANSCOM reported that 10% of military members experienced a problem in 2018, and nearly 105,000 military family members called for improvements to the system last year in a petition on Change.org.

The Defense Department is responsible for moving more than a half million service members and families a year. The contract could be worth more than $3 billion, White estimated.

Moving companies and military associations say they are concerned the DoD will award the contract and then fail to monitor the process — a lack of oversight by the Pentagon seen recently with private firms that run military housing.

Late last year, a scandal erupted over the condition of on-base housing units managed by private contractors. A substantial number of homes were found to be unsafe or unhealthy.

“We think DoD is rushing this. Looking at the lessons learned that the military is still getting from housing privatization, we should digest these lessons and apply them to future private contracts,” said Joyce Raezer, executive director of the National Military Family Association.

Industry groups believe that a working group made up of moving company representatives, military officials and family members would help build a successful PCS move program.

“We think it would be a better way to build a solution, as opposed to the approach DoD has been taking — the department deciding on its own what course to go,” said Scott Michael, president and CEO of the American Moving and Storage Association.

White said he is concerned about the interest of large defense firms.

“What do they know about moving someone's personal goods?” he asked.

The request for proposal will be listed on government contracting website FedBizOpps.

SEE ALSO: The Freakishly Durable Container That Makes The Nightmare Of Moving A Total Breeze