"So this curious visitor washed up on the beach today ... It has understandably caused some concern, but it’s not dangerous." 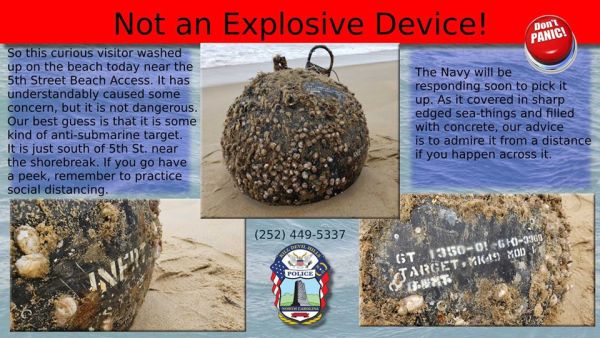 An intimidating device that looks exactly like a naval mine came ashore on the Outer Banks, alarming people in the small town of Kill Devil Hills.

The barrier islands of North Carolina have a history of collecting mines, torpedoes and military ordnance lost at sea.

In this case, however, Kill Devil Hills Police believe it’s a target, rather than a bomb.

“So this curious visitor washed up on the beach today (Monday) near the 5th Street Beach Access. It has understandably caused some concern, but it’s not dangerous,” the department posted on Facebook.

“Our best guess is that it is some kind of anti-submarine target… If you go have a peek, remember to practice social distancing.”

The department called the Navy to come get the device. Among the dangers: The device is “covered in shape edged sea things” that could hurt passersby, the department posted.

“Our advice is to admire it from a distance if you happen across it,” town officials wrote.

Discoveries of old missiles, mines and bombs are common on the state’s beaches, due to military training exercises staged off the coast in decades past.

In some instances, the discoveries are considered “live” and force beaches to be evacuated until experts can clear the danger, McClatchy News reported in 2018.

However, most of the beaches along the Outer Banks are currently empty due to states of emergency declared in Dare and Currituck counties for the coronavirus outbreak.