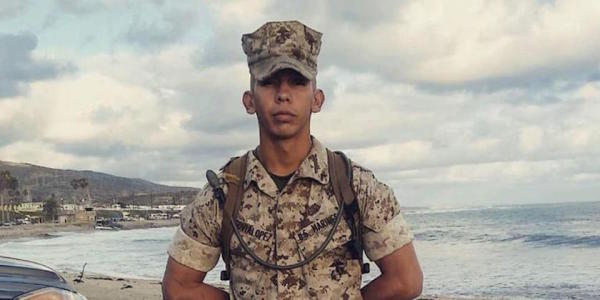 A 19-year-old Marine from Camp Pendleton has been hospitalized in grave condition after he was shot this weekend in South Los Angeles, authorities said.

The teen, identified by his family as Carlos Segovia, was found about 11:35 p.m. Friday slumped over and unconscious in a Dodge Charger in the 2100 block of 31st Street, according to Capt. Peter Whittingham of the Los Angeles Police Department.

Segovia left the military base near San Diego on Friday and was visiting friends and family for the weekend in South L.A., according to Claudia Perez, a family friend who said she treats him like her child.

Segovia wrapped up visiting his girlfriend Friday and was about to drive to Perez’s home, where he usually stays, when he was struck by gunfire, she said.

“He was on his way to my house,” Perez said via telephone from Segovia’s room at California Hospital Medical Center. “He texted my son that he was bringing pizza home. He never made it.”

Police notified the U.S. Marine Corps, which in turn notified Segovia’s family about the shooting. Whittingham said he is unlikely to survive and has little to no brain function.

Perez said he is being kept on life support but acknowledged that the family eventually would have to make a decision about ending medical care.

“He’s fighting for his life,” she added.

No suspect has been identified in the shooting. Police said Segovia has no connections to gangs or other activity that would seem to make him a likely target of gun violence.

“At this point, it’s absolutely a mystery,” Whittingham said. “Like so many cases in South L.A., we have nothing to go on at this point.”

Born in El Salvador, Segovia came to the U.S. with his mother. Both are U.S. citizens, Perez said.

After finishing high school, Segovia joined the Marines about six months ago.

He was known around his community for his volunteering and service work. Perez said he led a youth group called Teen Project, which aimed to motivate high school students to finish school and “go the right way in life.” He also worked at LA on Cloud 9, a nonprofit run by Perez that she said provides services to homeless people and to animals.

Students from USC Troy Camp, where Segovia once served as junior counselor for children in South Los Angeles, have set up a fundraiser to help his family pay for medical expenses.

She pleaded with members of the public to come forward with information about the killing.

“They shot a Marine. They shot a community leader,” Perez said. “It was not gang-on-gang violence like you normally see on South L.A. streets. He left a base to see his family and was murdered in the streets.”