Watch a gator effortlessly scale a fence onto NAS Jacksonville 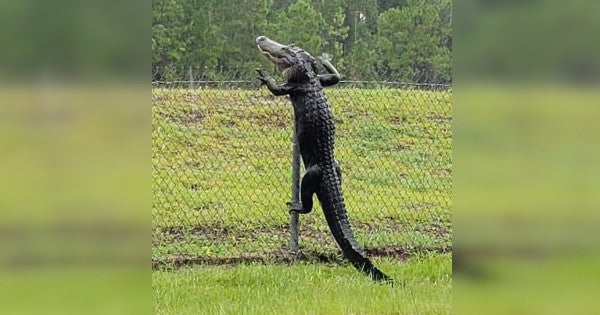 Americans' mighty military may have met its match when it comes to erecting barriers to keep out intruders.

An alligator in Florida recently had zero trouble flopping over a chain-link fence to get onto a naval air base. Motorist Christina Stewart pulled over to film it, and local television station WJAX posted it on Facebook.

The alarming video of Things We Never Thought We'd See is cringe-worthy in challenging our notions of animal safety.

And indeed, Naval Air Station Jacksonville, whose turf the alligator invaded, used it as a teaching moment in its own Facebook post.

“If you are new to Florida or have been here for years, when you see water, assume an alligator could be in it,” said the naval air station. “We have several on the base, and they don't respect our security measures. On the serious side, always be aware with small children and pets. Golfers be aware and watch where you stick your hands. Do not approach them ever!”

A South Carolina woman recently learned that the hard way, when she was bitten by a gator while walking her dog.

Gators normally try to slither under fences, USA Today noted, but in a pinch they will claw their way over the top.

The Jacksonville base did not seem perturbed by the invader, telling WJAX that it would not remove the animal unless it posed a danger to residents.