Defense Secretary Mark Esper on Wednesday acknowledged that a deadly shooting at this Florida military base had raised concerns about international students, but said new security measures should provide a "much higher degree of confidence" 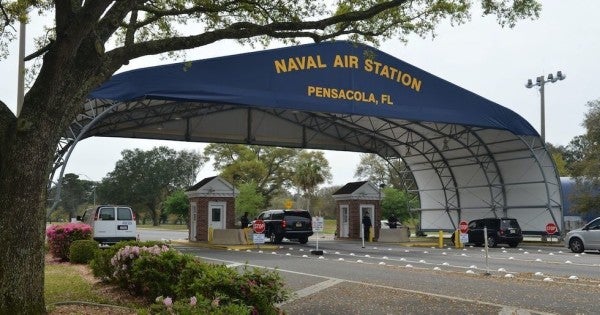 NAVAL AIR STATION PENSACOLA, Fla. — Defense Secretary Mark Esper on Wednesday acknowledged that a deadly shooting at this Florida military base had raised concerns about international students, but said new security measures should provide a “much higher degree of confidence.”

On Dec. 6, a Saudi pilot training at NAS Pensacola as part of an international program opened fire, killing three U.S. service members. The shooting prompted a review by the Pentagon of all Saudi military students in the United States and led to the expulsion of 21 for various offenses including access to child pornography and supporting anti-U.S. sentiment.

In the weeks after the Pensacola attack, the Pentagon has rolled out additional safeguards, including prohibitions on international students having access to firearms and continued monitoring while they are in the United States. International students are still restricted from flight training.

During his visit to Pensacola, Esper met with first responders who ran into the building and returned fire, killing the shooter. “Thank you for all of your courage,” he said, handing each a Defense Secretary coin.

At Pensacola, base commander Navy Capt. Tim Kinsella has held 25 town halls with concerned residents. While he said most are supportive of the international students, “there's a natural apprehension. What are we doing to make the base safer?”

NAS Pensacola trains 60,000 international students a year. Kinsella said the additional security measures are “just the beginning” and each military service branch will “dive in a little bit more” to see what additional safety requirements might be needed.

Florida Gov. Ron DeSantis, who was at the base with Esper, praised the international training program for building alliances, but said, “at the same time, we cannot be bringing people over here who want to do things like this to our country. So the fact they (Pentagon leadership) are taking action on this I think is very significant.”