The fact that it was Colin Kaepernick and the San Francisco 49ers only made the situation worse. Nate Boyer felt... 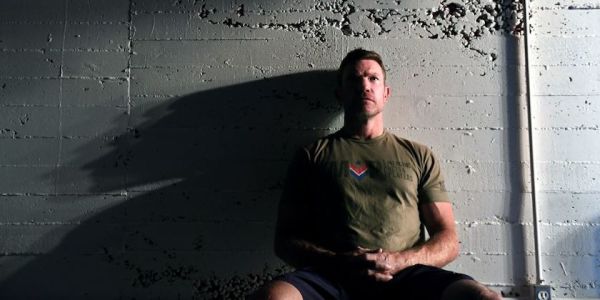 The fact that it was Colin Kaepernick and the San Francisco 49ers only made the situation worse.

Nate Boyer felt a connection with the quarterback. He even had an autographed football that Kaepernick had signed and written, of all things, “God Bless Our Troops.” And the 49ers? That was Boyer’s favorite team.

So when he heard that Kaepernick sat during “The Star-Spangled Banner” before an NFL exhibition game in 2016, it struck close to home.

“Initially, I was pretty disappointed,” recalled Boyer, who was in Lubbock, Texas, working a fundraiser for veterans when he learned of the gesture.

Boyer had seen death and devastation in Africa, had multiple war deployments as a Green Beret and even had a period of homelessness. He had a perspective about sports, and understood more about the NFL than the average fan, having spent a few weeks in training camp with the Seattle Seahawks as a long snapper.

He wasn’t mad, but he was entirely ready to dismiss Kaepernick as just another coddled and churlish star, acting up when his starting job was in jeopardy.

“I kind of just wrote him off initially, to be honest,” said Boyer, 37, of Los Angeles. “I was around a bunch of veterans. One of the dudes I was with was a paraplegic from military service”

Never could Boyer have dreamed that his life and Kaepernick’s would soon intersect, and that he would play a small but critical behind-the-scenes role in the most controversial sports protest in a generation. Kaepernick’s act led to some type of protest on virtually every NFL team, divided fans, became a central talking point for President Trump, and recently inspired a major advertisement campaign by Nike, coinciding with the 30th anniversary of the company’s “Just Do It” slogan.

A year before Kaepernick’s protest, Boyer had a bit of fleeting fame. He had served in the military, then cracked the University of Texas football roster as a 29-year-old freshman after teaching himself how to be a long snapper — hiking the ball back for punts and kicks — by watching YouTube videos. Before joining the team, he’d never played organized football. Soon, he was leading the Longhorns onto the field carrying the American flag.

As if that weren’t unlikely enough, he made it to NFL camp with the Seahawks as a 34-year-old rookie and wound up logging three plays in an exhibition game, even making a tackle, before he was released. His was a feel-good story, the kind that comes and goes around the league every summer. People got to know who he was, even though he had little chance of ever making a roster.

Seeing as he had a foot in both worlds, pro football and the military, several publications approached Boyer to write an editorial about Kaepernick. He declined, reasoning he wasn’t going to change any minds. It wasn’t until the Army Times came to him a second time that Boyer agreed, as long as he could write it as an open letter.

“I haven’t really written much at all,” said Boyer, who acknowledged he wasn’t a very good student growing up in El Cerrito, Calif., just north of Berkeley. “But I definitely write from a really honest place. I don’t try to find the perfect words for everything. I just say what’s on my mind and my heart and let it flow.”

In his letter, addressing Kaepernick directly, Boyer wrote about volunteering in the Darfur region of the Sudan, something he did after giving up on his dreams of being a firefighter and putting his acting aspirations on hold.

“Unfortunately, I also know that racism still exists in our country, as it does in every other country on this planet,” Boyer wrote, “and I hate that I know that.”

He discussed why he turned to the military after the Sudan, embracing the motto of the Army Special Forces: De oppresso liber, Latin for “to free the oppressed.”

“I’m not judging you for standing up for what you believe in,” Boyer wrote. “It’s your inalienable right. What you are doing takes a lot of courage, and I’d be lying if I said I knew what it was like to walk around in your shoes. I’ve never had to deal with prejudice because of the color of my skin, and for me to say I can relate to what you’ve gone through is as ignorant as someone who’s never been in a combat zone telling me they understand what it’s like to go to war.”

He closed by promising to keep listening, with an open mind, about the protests.

“I look forward to the day you’re once again inspired to stand during our national anthem,” he wrote. “I’ll be standing right there next to you. Keep on trying … De Oppresso Liber.”

The letter went viral, and Boyer fielded dozens of radio and TV interview requests. He was at NFL Network in Culver City when he received a phone call from Kaepernick’s publicist saying the player wanted to meet him before the 49ers played in San Diego the next night.

Boyer agreed, and the following day the quarterback sent an Uber that took him on a three-hour ride through heavy traffic to the team’s hotel. Kaepernick was waiting in the lobby, as was teammate Eric Reid, who would join the protest.

“We talked about where we were both coming from,” Boyer said. “I understood the message behind it at that point. … But it’s hard for a lot of people to get past the gesture because of when it’s happening. It’s during the anthem, and that’s a sacred time for a lot of people.”

He explained to Kaepernick that veterans might feel “you don’t have their perspective and their understanding, just like they don’t have yours.”

“He couldn’t really articulate it at that point, but it was very early on in the process,” Boyer recalled. “I said, ‘Well, if you’re not going to stand, first of all, I think sitting on the bench isolated from your team is not very inspiring. It looks like you’re sitting it out or you don’t care.”

While making it clear he would not stand, Kaepernick asked Boyer if there was another way he could protest. Kneel rather than sit, he was told, that way you can be alongside your teammates.

That next game, Kaepernick knelt during the anthem, and Boyer, hand over his heart, stood alongside him on the sideline in street clothes.

“I was showing that I support his right to do that, I support the message behind what he’s demonstrating for,” Boyer said. “But I’m also standing with pride because I feel differently in a lot of ways too. But there’s nothing wrong with feeling differently and believing different things. We can still work together to make this place better.”

Boyer found he could relate to Kaepernick, because he had spent plenty of his own time on a road less traveled. Instead of heading for college after high school as his sister and brother did, he spent a year working on a fishing boat in San Diego. When he decided to try acting, he moved to Los Angeles and lived out of his 1993 Honda Civic hatchback.

He kept a sleeping bag in his car, and sometimes would find a park in Beverly Hills to spend the night, somewhere that looked safe.

“I guarantee that my parents were plenty worried about me,” said Boyer, whose mother earned a doctorate degree from the University of California, Berkeley in civil/environmental engineering, and whose father is the longtime track veterinarian at Golden Gate Fields.

Boyer said he has taken issue with some of Kaepernick’s decisions, among them wearing socks with cartoon pigs dressed as police officers, and a T-shirt featuring late Cuban leader Fidel Castro.

The quarterback opted out of his contract with the 49ers after the 2016 season and has not signed with another team. He is suing the league, alleging he has been blackballed because of his protests.

“I don’t agree with the fact that he said he wouldn’t vote because he doesn’t want to vote for an oppressive system like ours,” said Boyer, who said he hasn’t talked to Kaepernick in more than a year. “I thought that was incorrect. There’s a lot of people of all colors who shed a lot of blood, and there were people in the civil rights movement who did a lot to secure those rights.”

Boyer, who shares a Studio City apartment with two friends, is involved with multiple charitable causes, among them MVP: Merging Vets and Players and, along with Philadelphia Eagles defensive end Chris Long, Waterboys, aimed at providing clean well water to East African communities. Boyer is also working in the film industry, with a special emphasis on telling the stories of veterans.

Two years after the protests began, he is frustrated because he feels their message and intent have been misinterpreted or intentionally hijacked.

From liberals: “ ‘Hey, don’t you know it was a Green Beret who told Colin to protest in the first place, told him to take a knee?’ ” Boyer lamented: “And I’m like, ‘I didn’t tell him to do anything. I definitely didn’t tell him to protest. What I did was meet with him, make suggestions on different ways to do it after he was already protesting. And worked with him to kind of come to a middle ground.”

And from conservatives: “(They) put all veterans in this box and say, ‘You’re offending every veteran.’ That’s also ridiculous. Or, ‘He’s protesting the anthem.’ He’s not protesting the national anthem. It has become an anthem debate, but that’s not what the protest is about. It’s about racial inequality, police brutality.”

Whether people agree or disagree, Boyer wishes the message hadn’t been intercepted.