Here are some of the key events of the latest National Guard deployment at the border since it was announced in 2018. 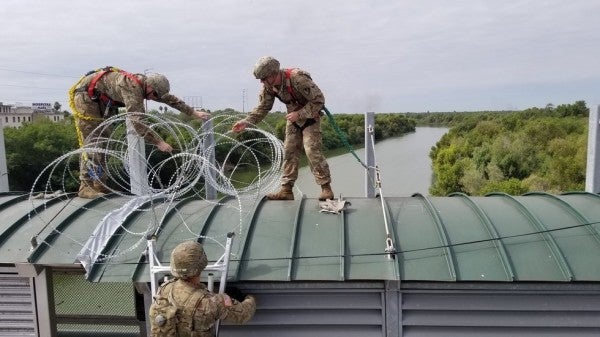 California Gov. Gavin Newsom followed the lead of New Mexico Gov. Michelle Lujan Grisham Monday, and announced he would pull a majority of National Guard troops from the U.S.-Mexico border.

Newsom and his New Mexico counterpart have both been in office about a month and are overturning the previous governor's decision in their respective state. The Republican governors of Arizona and Texas — the other two states on the border of Mexico — are not moving any National Guard troops away. Texas Gov. Greg Abbott and Arizona Gov. Doug Ducey support President Donald Trump's deployment of National Guard troops along the border. Both were sworn into office in 2015.

Lujan Grisham is a Democrat who took over for a Republican, Susana Martinez, after the 2018 election. Newsom took over for fellow Democrat Jerry Brown, but after talking it over with advisers, decided to pull back about 260 of the 360 National Guards troops Brown had sent to the border.

Newsom said he wants to refocus the work of the National Guard troops at the border on the real threats facing California, which he described as wildfires and transnational criminal gangs running guns and drugs across the border. He said in a newly redefined scope of work, National Guard troops would no longer work in dispatch or surveillance roles that had them tangentially involved in the detention of immigrants.

Here are some of the key events of the latest National Guard deployment at the border since it was announced in 2018.

Citing a law that allows the president to request the support of the National Guard, Trump asked his secretary of defense to help the Department of Homeland Security stop “the flow of deadly drugs and other contraband, gang members and other criminals, and illegal aliens into this country.”

“The situation at the border has now reached a point of crisis,” Trump's memorandum said. “The lawlessness that continues at our southern border is fundamentally incompatible with the safety, security, and sovereignty of the American people. My administration has no choice but to act.”

Trump's action did require the support of the four border state governors, however.

Some people wondered at the time whether Trump had the authority to make the request, but he wasn't the first president to take such an action. Both Presidents George W. Bush and Barack Obama deployed the National Guard at the border to fight illegal immigration and drug trafficking.

In the first deployment, the Republican governors of Arizona, New Mexico and Texas agreed to send about 1,600 National Guard members to the border, with plans to send more in future weeks and months. Texas was the first state to deploy a contingent that same day, on a Friday.

At the time, up to 4,000 troops had been authorized to deploy to the border. Their stated mission included help with aviation, engineering, surveillance, communications, vehicle maintenance and logistical support, according to the Pentagon.

Arizona became the second state to send National Guard troops to the border on April 9 (a Monday). At that time, New Mexico was announcing it would send troops later in the week, and a deployment was still under consideration in California.

Gov. Jerry Brown was the last of the bordering states with Mexico to agree to send National Guard troops to the border. He did so with the caveat that they would not in any way enforce federal immigration law. He added 400 National Guard members to the 250 already working on transnational crime in the state, including 55 already at the border.

“Your funding for new staffing will allow the Guard to do what it does best: support operations targeting transnational criminal gangs, human traffickers and illegal firearm and drug smugglers along the border, the coast and throughout the state,” Brown said.

In the final stages of the 2018 mid-term elections, Trump and the Defense Department announced that more than 5,000 active-duty military troops would head to the Southern border.

Gov. Brown announced that the National Guard deployment to help with border security will be extended for another six months through March. At the time, about 400 troops were stationed along the border, with 250 in San Diego and El Centro combined.

The Department of Defense announced that military troops would continue to assist the National Guard and the Department of Homeland Security at the southern border through September. Their duties were to include “hardening ports of entry to mobile surveillance and detection, as well as concertina wire emplacement between ports of entry.”

Just before the president's State of the Union address, Gov. Michelle Lujan Grisham, a newly-elected Democrat, announced she would be pulling back most of the state's National Guard presence along the border.

“New Mexico will not take part in the president's charade of border fear-mongering by misusing our diligent National Guard troops,” Lujan Grisham, a Democrat, said of the 118 who were there.

Ahead of his State of the State address, newly elected California Gov. Gavin Newsom, a Democrat, said he would be pulling back most of the 360 or so National Guard troops helping at the southern border. He said he wanted to negotiate a deal with the federal government so that it would pay to station about 100 National Guard troops along the border.

“The border 'emergency' is a manufactured crisis,” an excerpt of his planned Tuesday speech showed. “This is our answer to the White House: No more division, xenophobia or nativism.”