The National Guard has been activated in 18 states to staff testing facilities and emergency op centers and sanitize public areas and transport healthcare workers. 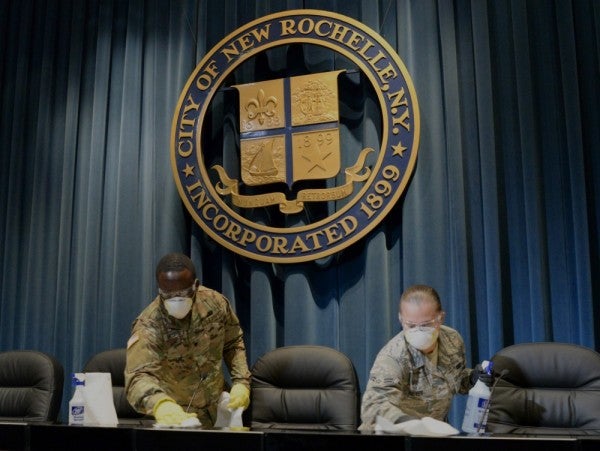 The Pentagon said Tuesday it has mobilized 1,500 National Guard troops to help fight the coronavirus epidemic, but the top federal official for infectious diseases warned that it's too soon to know whether a raft of strict restrictions on normal American life is slowing the infection rate.

Anthony Fauci, director of the National Institute of Allergy and Infectious Diseases, said it may take “several weeks and maybe longer” before it's clear whether the closure of schools and businesses and other widespread disruptions to the U.S. society and economy are “having an effect” on the deadly COVID-19 disease caused by the virus.

Appearing at a White House briefing with members of the coronavirus task force, Fauci hesitated to say when he expected coronavirus cases to peak, although he suggested 45 days “is not unreasonable.”

President Trump said he is considering ordering the Army Corps of Engineers to build temporary hospitals in New York and California if cases continue to surge and civilian facilities are overwhelmed.

At the Pentagon, Defense Secretary Mark Esper told a news conference that more than 1,500 members of the National Guard have been activated in 18 states to staff drive-through testing facilities and emergency operations centers, as well as to sanitize public areas and transport healthcare workers.

The Navy is preparing the Comfort and the Mercy, its two hospital ships, for potential deployments along the East and West coasts to ease the strain on civilian hospitals dealing with patients stricken by COVID-19, Esper said. Each ship has a 1,000-bed capacity, but it takes a week or more to mobilize active-duty and reserve personnel for the vessels.

Although the military could erect field hospitals in addition to the hospital ships, those facilities are optimized for trauma cases, not for infectious patients, officials said.

“What I don't want to do is take reservists from a hospital where they are needed just to put them on a ship to take them somewhere else where they're needed,” Esper said.

Mercy is based at Naval Base San Diego, while Comfort is at Naval Station Norfolk, Va.

Esper said the Pentagon would also provide 5 million respirator masks and 2,000 specialized ventilators to federal health authorities to help respond to the coronavirus.

As confirmed U.S. coronavirus infections soared past 5,000, the White House has been rattled by new research that suggests hundreds of thousands Americans may die before a vaccine is found, even with mitigating measures.

The study, from the Imperial College in London, said restrictions on daily life, including closing schools and quarantining sick people, could be needed for more than a year before a vaccine is ready,

Saying “we will win,” Trump offered an upbeat message to Americans battling what he calls an “invisible enemy” as the economy grinds to a halt, the stock market nosedives and a recession appears inevitable.

“We are going to come out stronger than ever before,” he said during a meeting with travel industry executives.

The Trump administration wants to send direct cash payments to Americans in the next two weeks to help them cope with the economic effects of the coronavirus, according to Treasury Secretary Steven T. Mnuchin, part of a massive economic stimulus package taking shape between Congress and the White House.

The total cost could be around $1 trillion, Mnuchin told reporters on Capitol Hill after meeting with Republican senators, making it one of the largest federal emergency fiscal packages ever assembled. Aid would go to shell-shocked industries, such as airlines, as well as families struggling to pay bills as jobs disappear.