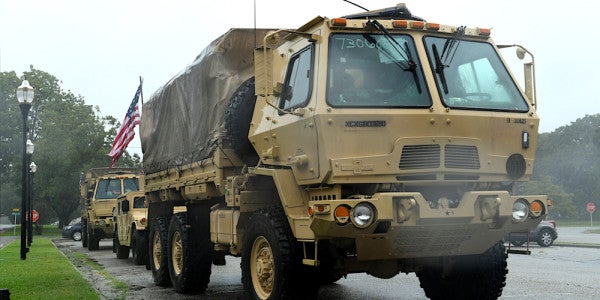 The highest-ranking officer in the National Guard has promised North Carolina whatever support it needs to recover from the aftermath of Hurricane Florence.

Air Force Gen. Joseph L. Lengyel, the chief of the National Guard Bureau and a member of the Joint Chiefs of Staff, made the promise during a tour Wednesday of parts of the state ravaged by Florence.

“Other states are trying to get troops and equipment and helicopters here,” he told soldiers who have been a key part of relief efforts in Lumberton for nearly a week. “We’re all postured in support of you.”

At a Lumberton armory, following a drive across a city divided by floodwaters from the Lumber River, Lengyel and Maj. Gen. Gregory A. Lusk, the adjutant general of the North Carolina National Guard, met with soldiers helping keep the community together.

With rising floodwaters threatening to cut off access to some communities in and around Lumberton, North Carolina National Guard soldiers — working with active-duty troops from the 101st Airborne Division — ferried law enforcement and supplies throughout the city while also helping residents evacuate from their homes.

The NCNG soldiers were the first to enter Lumberton once the storm passed, officials said.

And on Wednesday, Lusk pledged that they would be the last to leave.

That’s what the National Guard does, Lengyel said while riding on the back of a light medium tactical vehicle through flooded roads.

“We’re the first in and we’ll be the last out,” he said. “That’s the way it works. We’re America’s hometown response force.”

Of the approximately 13,000 service members involved in Florence relief efforts, more than 8,000 belong to the National Guard, officials said. The rest are active-duty troops deployed in support of the Guard effort.

Those troops include service members from installations hit by Florence, like Fort Bragg and Camp Lejeune, and troops from other installations, including Fort Drum in New York, Fort Campbell in Kentucky and Fort Stewart in Georgia.

In North Carolina, more than 3,400 National Guardsmen from 13 states are involved in relief efforts, officials said. More than 3,100 of those soldiers and airmen are from North Carolina.

They include soldiers like Master Sgt. Jamie Lowery, whose home in Pembroke is less than 12 miles from flood-stricken Lumberton. Lowery is one of three NCNG soldiers from Robeson County who are serving as liaisons with the county emergency operations center.

On Wednesday, he said flooding from Florence was more widespread than Hurricane Matthew, which devastated the area in 2016.

Lowery said there was no place he’d rather be than helping his community, even though he has only been home for two weeks.

A member of the 449th Theater Aviation Brigade, he spent most of the past year away from his home and family while deployed to parts of Iraq and Syria.

Lowery isn’t the only soldier for whom Florence had bad timing.

Thousands of soldiers with the Guard’s 30th Armored Brigade Combat Team, which is dispersed across parts of the state hardest hit by Florence, had just returned from a rigorous, month-long training exercise on the other side of the country. Their equipment, including trucks that could have been used in relief operations, has yet to return to North Carolina via rail.

The 449th TAB, the state's aviation headquarters, is also waiting on its equipment to return from overseas.

“That was definitely a big challenge,” Lusk said of response efforts.

Soldiers have borrowed trucks from Fort Bragg and neighboring states, he said. And in some cases, like in Lumberton, active-duty troops have stepped in to provide transportation.

Lusk said more than 10 states provided aviation assets to fill in for the 449th TAB.

The 63rd Theater Aviation Brigade from Kentucky sent 60 soldiers to provide mission control of Army helicopters crisscrossing the state in support of search and rescue, resupply and troop movement missions. Other states sent helicopters or pilots to help east of Interstate 95.

Lengyel said more than half of all state National Guards have contributed to relief efforts in some way, lending personnel, aircraft, trucks and supplies to efforts underway in both states.

That aid comes naturally for forces used to responding in times of disasters on the home front, he said.

“American is watching this. People in North Carolina are watching this,” Lengyel said. “And if this was happening in another state, you would be there helping them.”

On Wednesday, Lengyel and Lusk got a look at some of the damaged areas. They flew to Marine Corps Air Station Cherry Point, where President Donald J. Trump held a brief roundtable discussion on relief efforts, then flew over the coast and parts of southeastern North Carolina that are still flooded.

From a UH-60 Black Hawk, the two generals could see roads covered in water, houses with severe damage or roofs with homes hidden under muddy brown water.

In Lumberton, they met with soldiers. Some come from areas that have had their own Florence-related troubles. Most have not been home in more than a week.

The NCNG deployed more troops ahead of Florence than for any other storm in state history, officials said, more than doubling the roughly 1,500 troops called up in support of Hurricane Matthew.

Lusk said that was driven by expectations for the severity of Florence, which was a Category 4 storm as it approached the coast but quickly weakened.

The storm could have been one of the strongest to ever hit the state and at one time was expected to cut a path through the center of North Carolina, the general said. But even in its weakened state, it has destroyed communities.

“We dodged a bullet,” Lusk said. “But that is no less devastating to the people of Lumberton and Robeson County.”

Lengyel said he was impressed by the relief efforts led by the NCNG and the support provided from other states and active-duty partners.

“This is a very competent, capable state,” he said. “They know how to synchronize these types of things.”

While some communities are still coping with rising floodwaters, many across the state have begun the long process of rebuilding.

Lengyel said active-duty troops will begin to be sent home in the coming days. And some Guard troops, too, will be sent back to their normal lives.

But others will be an integral part of rebuilding efforts.

“It’s something special that we do,” he said. “We save lives and mitigate suffering. And we put our schools and jobs and lives on hold while helping others.”