A member of the Texas National Guard who was deployed to the U.S.-Mexico border is accused of stealing methamphetamine that... 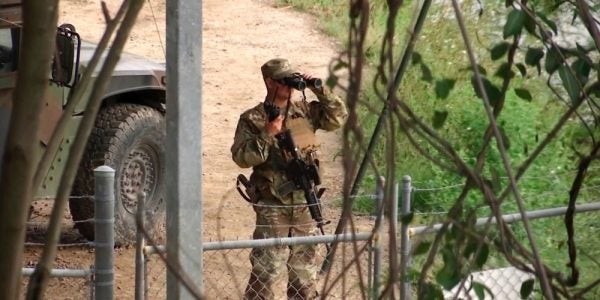 A member of the Texas National Guard who was deployed to the U.S.-Mexico border is accused of stealing methamphetamine that had been seized by Customs and Border Protection agents.

The soldier, Pvt. Edwin Baez, a 30-year-old from the Houston area, allegedly stole about 3.3 pounds of the drug from CBP on August 1, according to a federal affidavit seen by the Associated Press.

The Justice Department said Baez was accused of removing a picture frame in which he knew bundles of meth were hidden. He allegedly put the frame in a dumpster to dispose of it but came back to get some of the meth.

“The criminal complaint alleges he took the drugs to his hotel room with plans to consume some of it and sell the remainder,” the department said. “He was arrested following his release from the hospital for a drug-induced emergency.”

Baez has been charged with theft of government property, conspiracy and possession of meth with the intent to distribute it. A federal judge ordered that he be held in custody ahead of a hearing in Laredo on Friday.

Related: US Troops Deployed To The Border Are Doing Grunt Work To Keep Them Out Of Trouble »

The drugs in question had a total value of about $12,000. Baez faces at least 10 years and as much as life in federal prison if convicted. The theft of government property charge also carries a penalty of up to 10 years.

Baez was deployed to Laredo to assist CBP agents working at the World Trade Bridge, which stretches between the Texas city and Nuevo Laredo in Mexico, with surveillance, reconnaissance, and operational and logistics support.

Texas National Guardsmen started arriving in Laredo in early May.

Jason Owens, then the acting chief patrol agent for the Border Patrol in the Laredo Sector, said at the time that

National Guardsmen would be there until at least October, providing air support, operating camera towers, and helping maintain the understaffed sector's roughly 1,500 vehicles.

A National Guard soldier watches over the Rio Grande River on the border in Roma, Texas, April 10, 2018.Associated Press/John Mone

President Donald Trump's announcement earlier this year that several thousand National Guard troops would be deployed to the border got mixed reactions.

Some residents and officials saw it as unnecessary and wasteful, though others felt it would increase enforcement and benefit border agents who were stretched thin. (Presidents George W. Bush and Barack Obama also deployed troops to the border.)

In the months after guardsmen arrived at the border, a number of reports indicated they were limited in what they could do.

The Trump administration authorized Title 32 duty status to deploy and fund the operation. But Title 32 allows the National Guard to operate “up to” the U.S.-Mexico border, meaning they could use the naked eye to peer over the frontier but not technology that extended their vision beyond it.

Related: Guardsmen Can Patrol The US-Mexico Border But Can’t Look Across It »

Because of restrictions on military involvement in civilian law enforcement operations, those troops were also barred from apprehending suspects or having physical contact with migrants.

The support they are allowed to provide reportedly seems to include a lot of grunt work.

A Politico report this summer said many guardsmen deployed in Arizona, who were unarmed, were assisting the border patrol by feeding horses, shoveling manure out of stables, and doing basic repairs on vehicles.