Roughly 42,700 National Guard members have been deployed all over the United States since a surge of protests broke out after the May 25 death of George Floyd, an unarmed black man, in Minneapolis police custody 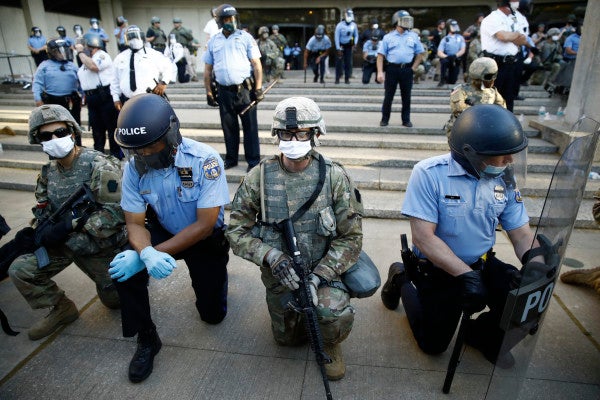 The secretary of the Army recently acknowledged the emotional challenges National Guard members face in their civil unrest response mission, but said soldiers and airmen cannot protest in uniform.

Roughly 42,700 National Guard members have been deployed all over the United States since a surge of protests broke out after the May 25 death of George Floyd, an unarmed black man, in Minneapolis police custody.

Guardsmen supporting federal and state law enforcement have faced angry crowds that are often verbally and, at times, physically abusive.

But on occasion, these citizen soldiers and airmen have also become swept up in the emotion of the demonstrations and expressed solidarity with those protesting racial injustice.

A YouTube video, posted by The Telegraph, showed Guard soldiers taking a knee with protesters in Minnesota on June 1.

“As a citizen of Minnesota, I am sorry for the loss of George Floyd,” Lt. Col. Sam Andrews told the crowd after taking a knee.

Andrews later hugged protesters and said, “Hey, we can hear you. Respect our property, and we will respect, 100% preserve and protect the Constitution and your liberties to peacefully assemble and speak the First Amendment.”

Army Secretary Ryan McCarthy spoke to reporters recently about the issue and said he understands the challenges Guard members face in such a complex time in the country.

“We're not allowed really to protest in uniform, but you see the emotions in the country,” he said. “In many cases, protesters are hugging soldiers. … It's a very complex and difficult time.

“We are a reflection of the country. We're Americans,” he added.

The Guard members in Minnesota did not receive any disciplinary action for taking a knee with demonstrators during the June 1 protest, Master Sgt. Blair Heusdens, spokeswoman for the Minnesota Guard, told Military.com.

But on Friday, a young black soldier with the D.C. National Guard is seen in a Fox News video whispering, “I'm black and I'm proud” as demonstrators shouted the chant.

Maj. Gen. William Walker, commander of the D.C. Guard, told reporters that its members have maintained discipline but often feel the same emotions as protesters.

“We're all hurting; the nation is hurting,” he said. “You know, I have some Guardsmen whose family members came out and criticized them. 'What are you doing out here? Aren't you black?'”

As time has passed, the demonstrations have become more peaceful, prompting the Pentagon to dial back the Guard's presence.

In the after-action reviews that will follow, leaders will work to reinforce to Guard members the importance of staying out of protests, while acknowledging that “emotions are running high,” McCarthy said.