National Guard Will Not Get Called On To Stop Chicago Violence

As Chicago capped off its deadliest month in almost 20 years, Illinois Gov. Bruce Rauner on Wednesday ruled out the... 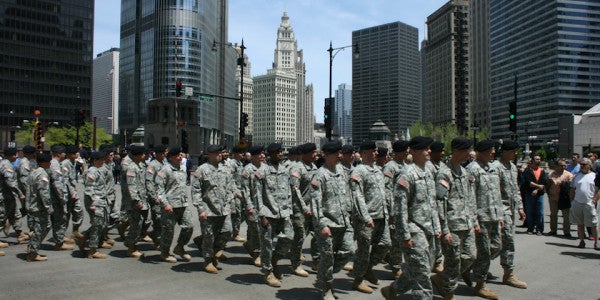 As Chicago capped off its deadliest month in almost 20 years, Illinois Gov. Bruce Rauner on Wednesday ruled out the idea of deploying the National Guard to help combat street violence in the city, saying that to do so would be an “emotional” reaction that “wouldn’t make sense.”

The Republican governor said he had discussed the concept with community leaders, police officers and the National Guard, but that “no thoughtful leader thinks that’s a good idea or would really provide a solution.”

The question arose as the Rev. Michael Pfleger, a priest and community activist, planned a Wednesday evening rally at his South Side church to pressure Rauner to declare a state of emergency in order to tap federal resources to help deal with the violence problem. Chicago has racked up more homicides and shootings this year than New York and Los Angeles combined.

Taking questions after a speech to insurance agents in Naperville, Rauner said Chicago was facing a “crisis.” But the governor wouldn’t say if he thought the situation had reached “emergency” status, deflecting the question as a “technical term.”

Calling up the National Guard is an idea that has repeatedly surfaced during the last decade amid Chicago’s persistent gun violence. A change.org petition pushing the idea has accumulated more than 10,000 signatures. On Wednesday, a reporter suggested to Rauner that residents on the South and West sides want the troops brought in.

“Well, see, sometimes, when you get emotional and you say, ‘Well, we’ve got to do something,’ …the reality is, sometimes, something is — actually makes it worse, or something creates other problems,” Rauner said. “You’ve got to think these things through and the implications. And the National Guard right now wouldn’t make sense.”

Over the years, politicians looking to score political points have floated the National Guard-to-Chicago idea.

In 2008, then-Democratic Gov. Rod Blagojevich said violent crime was “out of control” and “reaching epidemic proportions” in certain neighborhoods, and suggested the National Guard and Illinois State Police could help. It was a surprise to then-Mayor Richard M. Daley, who was puzzled as to how that would actually work and suggested the governor “should be careful” about making such comments.

Two years later, a pair of Democratic state lawmakers floated the same idea, and Daley again dismissed it. “You put them on for a weekend, without ammunition?” Daley asked at the time. “Think of the repercussions you have to look at. … A fully automatic weapon?”

It’s difficult to believe any Chicago mayor would take a governor up on such an offer, given the political optics of footage of troops marching down city streets with cable-news graphics asking, “Chicago: A War Zone?”