After three years of construction, the National Museum of the U.S. Army will open to the public on June 4, 2020 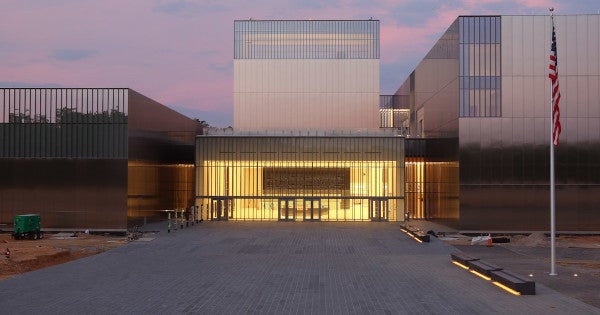 After three years of construction, the National Museum of the U.S. Army will open next summer.

The 185,000-square-foot museum at Fort Belvoir will open to the public June 4, 2020, according to a press release from the Army Historical Foundation.

Admission to the museum will be free, but tickets for a specific date and time will be required. Updates about the reservation process will be posted at armyhistory.org/opening-day.

The museum will feature three main exhibits: “Soldier Stories,” “Fighting for the Nation” and “Army and Society.”

“Fighting for the Nation” will be broken down into six galleries that cover a different period in the Army's history, starting with the Revolutionary War and ending with the most recent wars in Iraq and Afghanistan.

“Army and Society” will explore the Army's contributions to medicine, aviation, communications and technology, as well as the role the Army has played in national issues such as immigration, integration and educational opportunities.

“Soldier Stories” will contain the biographical information and personal narratives of 41 soldiers from different historical periods and backgrounds.

“The service of each of these soldiers reflects one or more of the seven Army values of loyalty, duty, respect, selfless service, honor, integrity, and personal courage,” the museum's website states.

The museum complex will also include a theater, an interactive “experiential learning center,” an art gallery and space for special, rotating exhibits.

Construction of the museum has been funded by the Army and the Army Historical Foundation, which has raised $175 million from more than 178,000 donors toward a $200 million campaign.

“We are asking the American people to get involved and contribute to this campaign before the museum doors open next year,” Lt. Gen. Roger Schultz, president of the Army Historical Foundation, said in the press release. “There is simply no better way to ensure our nation always remembers and honors the contributions of the American soldier than by supporting this historic project.”

The museum is now accepting applications for volunteers and booking event spaces for August 2020 and beyond.