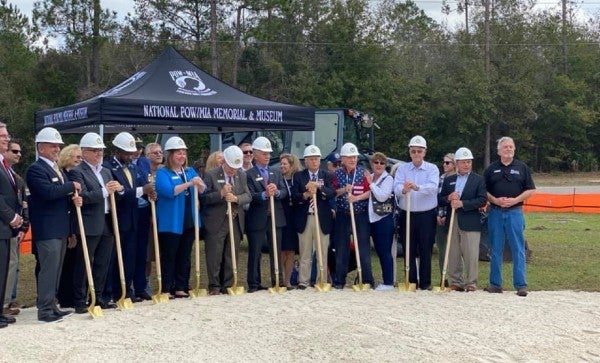 A standing-room-only crowd that including former prisoners of war, as well as the families of those missing in action, and Gold Star families wept, hugged and prayed together during a solemn ceremony marking the groundbreaking for the total, estimated $82 million National POW/MIA Memorial & Museum.

The first of its kind, the memorial and museum is being built at 6112 POW-MIA Memorial Parkway, at Cecil Commerce Center, which is the former Naval Air Station Cecil Field jet base on the Westside of Jacksonville.

“Our mission is to honor all former prisoners of war; remember and never forget those missing in action heroes and the families who seek their return,” said Mike Cassata, organization executive director.

The memorial and museum is being built on 26 acres.

Michael Pearson, who recently retired from the U.S. Army National Guard after 20 years, and Tony Langhals, who served as a U.S. Navy patrol aircraft electronics technician before retiring, also after 20 years of service.

Both veterans thoughtfully studied the master site plan for the project. They liked what they saw, noting it is a fitting way to honor prisoners of war and the missing in action.

Pearson said he and his fellow members of the American Legion Riders motorcycle club — military veterans who do charitable work in the community — support the project 100 percent.

“I am so anxious to see it when it's done,” said Pearson, whose National Guard unit trained at the site that will become the museum and memorial.

“Seeing that this is what it's going to be one day, is exciting,” Pearson said.

Langhals said he came out to the groundbreaking of respect for prisoners of war and those missing in action.

“I really respect what they went through and what they have given to our country. I'm just happy to see something like this built in Jacksonville to honor them,” Langhals said.

About 82,000 American military personnel are listed as missing in action and unaccounted for since World War II, according to the Defense POW/MIA Accounting Agency (DPAA). The agency works to account as fully as possible for the missing soldiers, sailors and air crew members.

Kelly McKeague, agency director, was among the speakers at the groundbreaking.

“Establishing this national memorial rightfully pays tribute to the overwhelming sacrifices borne by our former POWs and the thousands still missing in action,” McKeague said.

Retired U.S. Air Force Capt. William “Bill” Arcuri was flying his 44th mission when his aircraft was shot down Dec. 20, 1972 over Yin Ven, North Vietnam then captured and thrown into a prison camp. He was a prisoner of war until Feb. 12, 1973. Because of his injuries, Arcuri was among the first group of POWs to be released.

The keynote speaker, Arcuri said project like the National POW/MIA Memorial & Museum keep the issue alive in the minds of government officials and citizens.

“We who came home must never forget those who did not,” Arcuri said.

The existing NAS Cecil Field Memorial Park was dedicated to those naval aviators stationed at NAS Cecil Field during the Vietnam and Desert Storm War eras. It is being transformed into the new museum and memorial, which supporter say will be “world class.”

The groundbreaking was for Phase 1 — estimated at about $5 million — of the five-year project. Phase 1 calls for restoring and using the historic military chapel — named the Chapel of the High Speed Pass.

Just to the north of the chapel, there will be a display of four aircraft that flew out of Cecil Field. The existing grounds of the memorial park will be enhanced, and a replica of the USS Saratoga (CV-60) will be built, according to the plans,

The chapel renovation is nearly complete, and it served as home base for the groundbreaking ceremony. The jet display and memorial brick areas have been designed and permitted.

The project is 59 percent funded, according to the organization.

“This is the beginning of something that we feel will be paramount for the city of Jacksonville, as well as the nations veterans,” said Buddy Harris, a retired U.S. Navy commander, who serves as National POW/MIA Memorial and Museum spokesman.

When completed, the memorial and museum will be unique in that no other will be as comprehensive on the mission helping ensure that prisoners of war and those missing in action are not forgotten, Harris said.

“There is not a national memorial for all missing in action in the United States. …We certainly hope to fill a significant void that has been left in all of the national veterans memorials,” he said.

Their goal, he said, is to establish a site honoring all prisoners of war and those still missing in action that also will serve as a historic destination site for the nation. It is intended to serve and educate the general public through exhibits, special events, activities and through STEAM —Science, Technology, Engineering, Arts and Mechanical — programs.

Financial contributions as well as donations of materials for the project are welcome, Harris said.

“We hope have it as a sanctuary for the families of the MIAs, and also for the former POWs,” he said.