US Ambassador To NATO Suggests Military Could ‘Take Out’ Russian Missiles

The U.S. ambassador to NATO, Kay Bailey Hutchison, says that the United States could “take out” Moscow’s intermediate range missiles... 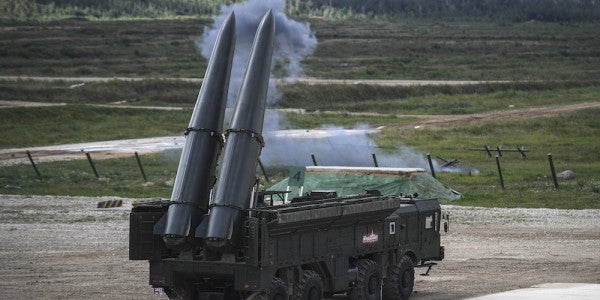 The U.S. ambassador to NATO, Kay Bailey Hutchison, says that the United States could “take out” Moscow’s intermediate range missiles that are being developed in contravention of the bilateral U.S-Russia Intermediate-Range Nuclear Forces (INF) Treaty. Hutchison insists that the United States will adhere to the INF, but that Russia must stop its violation of the treaty.

“The countermeasures would be to take out the missiles that are in development by Russia in violation of the treaty,” Hutchison told reporters on Oct. 2. “So that would be the countermeasure eventually. We are trying not to do anything that would violate the treaty on our side, which allows research, but not going forward into development, and we are carefully keeping the INF Treaty requirements on our side, while Russia is violating.”

Hutchison said that the United States would prefer that Russia withdraw the missiles, but that Washington would not tolerate the presence of those weapons in Europe or elsewhere. “Getting them to withdraw would be our choice, of course. But I think the question was what would you do if this continues to a point where we know that they are capable of delivering,” Hutchison said. “And at that point we would then be looking at a capability to take out a missile that could hit any of our countries in Europe and hit America in Alaska. So it is in all of our interests, and Canada as well, I suppose. So we have our North Atlantic risk as well as the European risk.”

The context of Hutchison’s comments would seem to suggest that she means that the United States and its NATO allies would seek to develop missile defenses to intercept Russian intermediate range missiles after they have launched. However, Hutchison’s choice of words leave room for a dangerous level of ambiguity where her comments might be interpreted as suggesting that Washington might launch a preemptive strike on Russian strategic nuclear forces. Such an action would undoubtedly spark World War III. Indeed, initial reporting from Reuters and the U.S. government-funded Radio Free Europe/Radio Liberty seemed to make the interpretation that the U.S. would attack the Russian missiles directly with a kinetic strike.

Related: It Looks Like Russia’s ‘Massive’ Military Exercise Wasn’t So Massive After All »

The Russian Foreign Ministry, too, seems to have interpreted Hutchison’s statements as a threat to attack Russia. Russian Foreign Ministry spokeswoman Maria Zakharova decried Hutchison’s statement as dangerous. “It seems that people who make such statements do not understand the degree of their responsibility and the danger of such aggressive rhetoric,” Zakharova said according to Russia’s state-owned TASS news agency. “Who has this lady been authorized by to make such statements? By the American people?”

While Hutchison’s choice of words was exceedingly poor, it is most likely that she meant that the United States would invest more on missile defense and deterrence rather than launching a nuclear first strike.

“We are not moving in that direction right now, but we are trying to tell Russia, and you know, the United States Congress told Russia last year when they passed the Armed Services Bill about this time last year, that we know they have violated the treaty and we are beginning the research capabilities that are allowed by the treaty to deter a medium-range ballistic missile.”