50,000 Troops Are Prepping For NATO’s Biggest Show Of Force Since The Cold War

Editor’s Note: This article by Gina Harkins originally appeared on Military.com, the premier source of information for the military and veteran community. Marines are landing... 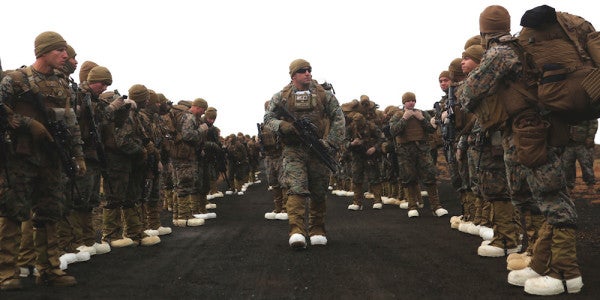 Marines are landing in Iceland, a Navy aircraft carrier is sailing past the Arctic Circle and U.S. aircraft are soaring over Scandinavia — and none of it has gone unnoticed by Russian military leaders.

Nearly 50,000 U.S. and NATO forces are gearing up for the largest iteration of Trident Juncture since 1991. Set to start Thursday, it'll involve troops operating in the air, on land and at sea in a month-long exercise that will test NATO forces' ability to respond to a large-scale event from several locations.

The exercise won't take place near Russia's border. But Lt. Gen. Valery Zaparenko, former deputy chief of general staff there, said he believes Trident Juncture is meant to send a message to his country, which has pledged to expand its capabilities in the Arctic region.

“All this talk from NATO about Russia not being the target of Trident Juncture doesn't hold water,” Zaparenko said,according to RT, a Russian-government-funded TV station. “Even if NATO says otherwise, Trident Juncture is really preparation for a large-scale armed conflict in regions bordering with the Russian Federation.”

Defense Secretary Jim Mattis disagreed, saying earlier this month at NATO's headquarters in Belgium that “it would be a mischaracterization to put [Trident Juncture] in any kind of offensive or destabilizing sort of context.”

About 14,000 U.S. troops are participating in the exercise, which is set to be one of NATO's largest since the end of the Cold War. Some of those troops have been participating in rehearsal exercises in the days leading up to Trident Juncture.

Despite the arduous weather and sea conditions, these men and women are demonstrating this ship can bring a full spectrum of capabilities to bear anywhere in the world,” Capt. Nick Dienna, the Truman's commanding officer, said in a Navy news release.

Two days before the carrier moved past the Arctic Circle, members of the 24th Marine Expeditionary Unit carried out a mock air assault on a base in southwest Iceland. About 100 members of Battalion Landing Team 2nd Battalion, 2nd Marines were flown in from ships with the Iwo Jima Amphibious Ready Group. They set up security for the landing zone, seized a military objective and then went on to conduct cold-weather training there.

The exercise was meant to help prepare the Marines for a large-scale amphibious assault in Norway during Trident Juncture. Other planned events include a naval exercise in the Norwegian Sea, combat-training operations in Norway, and flights there, in Sweden and in Finland in support of NATO ground forces.

Marines from Combat Logistics Battalion 8 will also use the exercise to test new ways to get gear ashore, using unmanned helicopters, handheld drones, and self-driving trucks, among other systems.