A Year After ‘Victory’ Over ISIS, NATO Commits To A Long-Term Military Training Mission In Iraq

Editor’s Note: This article by Richard Sisk originally appeared on Military.com, a leading source of news for the military and veteran community. NATO has... 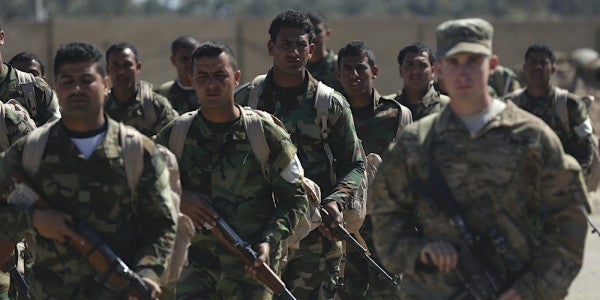 NATO has committed to a long-term military training effort in Iraq, where the Iraqi Security Forces are still struggling against pockets of ISIS fighters in several areas despite declaring victory over the terror group nearly a year ago, a British officer with the U.S.-led coalition said Tuesday.

Maj. Gen. Christopher Ghika, deputy commander for strategy for Combined Joint Task Force-Operation Inherent Resolve, also announced that the U.S.-backed Syrian Democratic Forces had renewed a stalled offensive in northeastern Syria against an estimated 1,500-2,000 fighters of the Islamic State in and around the town of al-Tanf.

In a video briefing from Baghdad to reporters at the Pentagon, Ghika said the new, open-ended NATO training mission in Iraq would begin early next year and would essentially involve teacher-on-teacher instruction.

“It's going to focus its efforts on the institutional education establishments, such as the National Defense University, the Staff College, the institutional structure of the Iraqi Ministry of Defense,” Ghika said.

In addition, the NATO instructors will be involved with some of the schools “which are building military capability in areas such as engineering, such as infantry fighting and things like that,” Ghika said.

The NATO instructors “will focus themselves on teaching the Iraqis, who will be instructing in those schools, rather than actually instructing in some of the combat skills,” he said.

He declined to say which NATO countries would be participating or how many personnel they would contribute.

Ghika said the Iraqi Security Forces were now conducting Operation Last Warning, which he said was “a series of coordinated military efforts” that began in the Anbar region, targeting small pockets of ISIS fighters, and has broadened to include the whole country.

In Syria, the Syrian Democratic Forces, which include significant numbers of Kurdish fighters, resumed the offensive against al-Tanf, although Ghika said operations in the Middle Euphrates River Valley had never completely ceased.

Late last month, the SDF announced that it was suspending the al-Tanf operation because of cross-border shelling and attacks by the Turkish military. Turkey considers the Kurdish fighters to be allied with the PKK, or Kurdistan Workers Party, which has been branded a terror organization by Turkey and the U.S.

In reference to Turkey's attacks on the SDF, Ghika said he thought “it would serve everybody's interests to de-escalate it so we can concentrate on the enduring defeat of ISIS.”

“I think that we should not be surprised that this is a hard fight,” Ghika said of the effort to collapse the al-Tanf pocket. “The people who are in there — the ISIS fighters in the [Middle Euphrates River Valley] — are some of their most hardened fighters.”

“They have nowhere to go. They are being contained, they have had time to construct a series of defense positions, IED [Improvised Explosive Device] belts, underground tunnels, things like that,” Ghika said. “And so we shouldn't be surprised that this takes time.”