NATO and Russian aircraft and ships have drawn ever closer in the skies and seas around Eastern Europe in recent... 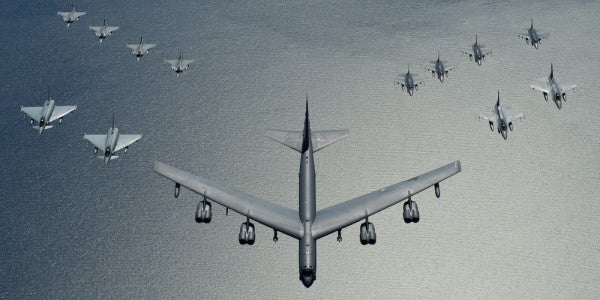 NATO and Russian aircraft and ships have drawn ever closer in the skies and seas around Eastern Europe in recent years, engaging in a kind of cat-and-mouse game that has led to many near misses.

A significant number of these encounters have taken place above the Baltics, where NATO members border a Russia they see as growing increasingly aggressive in its near abroad.

Western officials and the research and advocacy group Global Zero — which analyzed 97 mid-air confrontations between Russian and Western aircraft over the Baltic between March 2014 and April 2017 — have said that Russian pilots are more often responsible for unsafe interceptions; some of which arise from negligence or are accidents, while some are deliberate shows of force.

“What we see in the Baltic Sea is increased military activity — we see it on land, at sea, and in the air, and that just underlines the importance of transparency and predictability to prevent incidents and accidents,” NATO Secretary General Jens Stoltenberg told The Wall Street Journal. “And if they happen, it is important to make sure they don’t spiral out of control and create dangerous situations.”

Western officials and analysts believe Moscow is using such incidents as geopolitical tactics, responding to events in Europe and elsewhere, such as in Syria. Russia has denied this and said that recent reports about its abilities and activity in the region are “total Russophobia.”

Both sides are working toward “risk reduction” policies for the Baltics. But the uptick in aerial encounters comes amid increased military activity by both sides on the ground in Eastern Europe.

Lithuanian soldiers and US Marines from the Black Sea Rotational Force engaged opposition forces in a partnered attack during Exercise Saber Strike at the Pabrade Training Area, Lithuania, June 15, 2015.Photo via DoD

Some 25,000 troops from the U.S. and 23 other countries are taking part in the Saber Guardian military exercise in Bulgaria, Hungary, and Romania this month — the drills are designed as a deterrent and are “larger in both scale and scope” than previous exercises, U.S. European Command said in June. U.S. bombers also traveled to the UK in June in preparation for two separate multilateral exercises in the Baltics and elsewhere in Europe that month.

Those military exercises come ahead of war games planned for September by Russia and Belarus. Those exercises could involve up to 100,000 troops and include nuclear-weapons training.

Neighboring countries have expressed concern that those war games could leave a permanent Russian presence in Belarus — the U.S. plans to station paratroopers in Estonia, Latvia, and Lithuania during them and will adjust its fighter-jet rotation to put more experienced pilots in the area to better manage any encounters with Russian forces.

The U.S. and NATO have increased troop deployments to Eastern Europe. UK and Canadian forces are headed to Poland, Latvia, and Estonia, and NATO personnel are already in Lithuania. The latter country has called for a permanent US military presence there as “a game changer” to counter Moscow.

In the wake of this month's G20 summit in Germany, several countries in Eastern Europe are moving to boost their air-defense capabilities, with the US aiding the effort.

In early July, Poland and the U.S. signed a memorandum of understanding for an $8 billion sale of U.S.-made Patriot missiles.

This week, the State Department gave tentative approval to a $3.9 billion sale of Patriot missiles and related equipment, like radars, to Romania.

Patriot missiles have also been stationed in Lithuania for the first time, albeit temporarily, as part of military exercises focused on air defense and involving five NATO countries.

Russian President Vladimir Putin has said several times that the deployment of defensive missile systems by NATO allies would be a “great danger,” and he has threatened to respond by boosting Russia’s own missile systems.

“The way I view the Patriots deployment is that it also forms part of a broader U.S. response in the region to the upcoming Russian exercise nearby,” Magnus Nordenman, a Nordic security expert at the Atlantic Council, told AFP.

“Air defense has not been a priority for the last 15 years when NATO was busy in Afghanistan, dealing with piracy and peacekeeping,” he said. “There was not much of an air threat but now that Russia is building up air forces, it is different.”