A non-nuclear war between NATO and Russia could pit bombers, aircraft carriers and submarines against each other along Europe's cold northern... 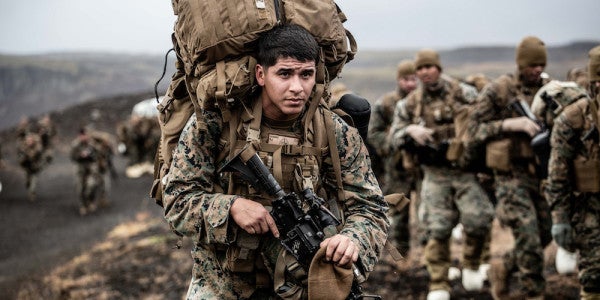 A non-nuclear war between NATO and Russia could pit bombers, aircraft carriers and submarines against each other along Europe's cold northern frontier, according to one new study.

If that sounds familiar, it's because a war between NATO and the Soviet Union might have played out in the same way 30 or 40 years ago.

“The resurrection of central elements of late Cold War maritime strategy has a significant amount of potential to deter and, if required, counter Russian aggression,” Rowan Allport concluded in “Fire and Ice – A New Maritime Strategy for NATO’s Northern Flank,” published by the Human Security Centre, a London foreign policy think tank.

The war might begin in the Baltic region … and initially, favor the Russians. “Were Moscow to launch hostilities, it is likely that Russian forces would be able to overrun vulnerable areas of NATO territory – including the Baltic states of Lithuania, Latvia, and Estonia – before adequate reinforcements could be deployed,” Allport warns.

“Russian forces would subsequently seek to deter and, if necessary, combat a major NATO response to such an attack.” The NATO counterattack — and Russia's defense against it — could play out in the North Atlantic and Arctic regions: “The northern maritime realm would be crucial in such a campaign by Moscow.”

“Submarines and ships of the Northern Fleet would threaten allied shipping and fire cruise missiles at targets on land,” Allport continues. “Russian aerospace force bombers would fly from Arctic circle bases to launch missiles against NATO’s rear area. Land-based ballistic and cruise missiles based in the Kola Peninsula would strike sensitive locations in Norway.”

A U.S. Marine with the 24th Marine Expeditionary Unit (MEU) carries cold weather equipment as he begins to march across the Icelandic terrain October 19, 2018. The 24th MEU was in Iceland preparing for NATO Exercise Trident Juncture 2018. The main phase of Trident Juncture will start in Norway on October 25. The exercise will bring together around 50,000 personnel from all 29 Allies plus partners Finland and SwedenU.S. Air Force/Capt. Kylee Ashton

The Soviets' own war plans were similar as far back as the 1960s.

But as was the case a generation or two ago, NATO is hardly powerless to combat, and eventually defeat, the Russian interdiction campaign. “Russia is vulnerable to NATO’s fully mobilized maritime power,” Allport's study concludes.

The transatlantic alliance's own campaign, based in and around Iceland, the United Kingdom, and Norway, should aim to secure sea lanes to ensure troops and supplies can safely cross the Atlantic from North America.

From the 1960s to the late 1980s, NATO conducted the annual Reforger exercises to practice a massive movement of forces from the Americas to Europe.

The Royal Navy should take the lead protecting the Atlantic convoys, Allport advises. The British fleet should lead a multinational task group centered on one of its new Queen Elizabeth-class aircraft carriers.

During the Cold War, the Royal Navy deployed Invincible-class carriers for this same purpose.

While, other NATO forces should target Russia's naval bases, missile launchers and airfields. The efforts would require a “multi-carrier deployment by the U.S. Navy,” Allport predicts.

It should come as no surprise that, during the Cold War, the American fleet regularly practiced multi-carrier ops in northern waters.

Related: The Navy Is ‘Preparing For Battle’ In The North Atlantic »

The U.S. Navy's reestablishment of its 2nd Fleet, a regional force for the North Atlantic, signals that the Pentagon is serious about preparing for a potential war with Russia, Allport said separately from his report.

The Navy had disestablished the 2nd Fleet in 2011 as a cost-saving measure. Three years later, Russia invaded Ukraine. “We’re back in an era of great-power competition as the security environment continues to grow more challenging and complex,” Adm. John Richardson, the U.S. Chief of Naval Operations, said while announcing the new 2nd Fleet.

“However, much more remains to be done,” Allport warned. “Russia represents a threat to NATO’s sea lines of communication through the use of advanced submarines, is capable of targeting the alliance with a growing arsenal of conventional strategic weapons such as the Kalibr and Kh-101 cruise missiles, and continues to build-up its facilities in the Arctic.”

NATO needs forces and plans to defeat each threat. The countermeasures all could come from the sea. “A firm commitment is now required by the alliance to rediscover the forward maritime strategy that helped contribute to winning the Cold War,” Allport said.