Tens of thousands of NATO troops have converged on Norway for Trident Juncture, the alliance's largest military exercise in nearly two decades.... 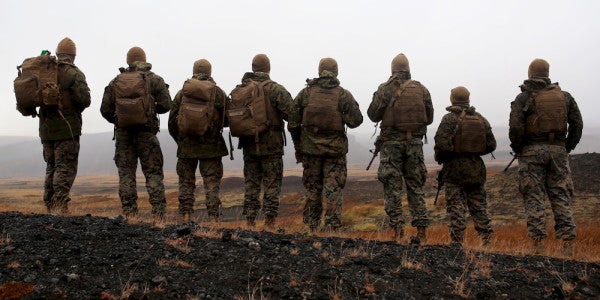 Tens of thousands of NATO troops have converged on Norway for Trident Juncture, the alliance's largest military exercise in nearly two decades.

The exercise officially starts on Oct. 25, but the arrival of thousands of troops and their equipment in the harsh environs of the North Atlantic and Scandinavia hasn't gone totally smoothly.

On Tuesday, four U.S. soldiers were injured in a roadway accident as they delivered cargo to Kongens Gruve, Norway, in support of the exercise.

“The accident occurred when three vehicles collided and a fourth vehicle slid off the pavement and overturned while trying to avoid the three vehicles that had collided,” the U.S. Joint Information Center said, according to Reuters.

The amphibious dock landing ship USS Gunston Hall, part of a group of ships carrying a Marine Corps contingent to the exercise, returned to port in Reykjavik, Iceland, on Monday after heavy seas caused damage to the ship and injuries to its sailors.

The U.S. 6th Fleet, which oversees operations in the Atlantic around Europe, said the ship's well deck and several of the landing craft aboard it were damaged. The Gunston Hall returned to port for a damage assessment, though there was no timetable for its completion, the fleet said.

The sailors who were injured received medical treatment and returned to duty.

The amphibious transport dock ship USS New York, also on hand for the exercise, also returned to Reykjavik “as a safe haven from the seas until further notice,” the fleet said.

A 6th Fleet spokesman told Navy Times that the seas were challenging “but not out of the [Gunston Hall's] limits” and that the USS New York “will remain in port until it is safe to get underway.”

The Gunston Hall and the New York were part of a group led by the amphibious assault ship USS Iwo Jima that left the U.S. earlier this month, carrying some 4,000 sailors and Marines.

That group carried out a simulated air assault in Iceland last week and has been doing cold-weather training in preparation for Trident Juncture.

It's not clear if the absence of the Gunston Hall and the New York will affect the exercise, the 6th Fleet spokesman told Navy Times.

Trident Juncture will include some 50,000 soldiers, sailors, marines, and other personnel from each of NATO's 29 members as well as Sweden and Finland. The drills will be spread across Scandinavia and the waters and airspace of the Baltic Sea and the North Atlantic.

Massing men and machines for such exercises rarely goes off without problems.

In June, as some 18,000 personnel from 18 countries took part in the Saber Strike 18 exercise in Eastern Europe, four U.S. Army Stryker armored vehicles collided during a road march in southern Lithuania.

Fifteen soldiers were taken to a local hospital, 10 of whom were held for overnight observation, but all returned to duty.