NATO Secretary-General Jens Stoltenberg has called on the security alliance's allies to maintain and strengthen their "unity," saying the organization is "the only guarantor of European and transatlantic security." 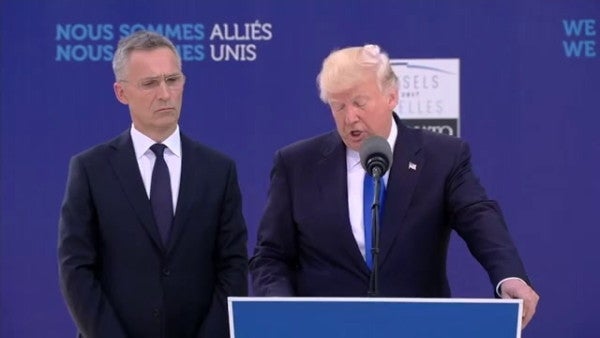 NATO Secretary-General Jens Stoltenberg has called on the security alliance's allies to maintain and strengthen their “unity,” saying the organization is “the only guarantor of European and transatlantic security.”

Stoltenberg told reporters on November 19 that NATO “has only grown stronger over the last 70 years” despite “differences” among the allies on issues such as trade, climate, the Iran nuclear deal, and the situation in northeastern Syria.

He was speaking at the alliance's headquarters in Brussels on the eve of a NATO foreign ministers meeting aimed at finalizing preparations for next month's summit in London.

The secretary-general said he planned to hold talks with Emmanuel Macron next week after the French president suggested NATO was experiencing its “brain death” because of Washington's lack of predictability under President Donald Trump.

“What we are currently experiencing is the brain death of NATO,” Macron told The Economist magazine on November 7, before questioning the core pledge of NATO allies to come to the defense of any member, if attacked.

Senior U.S. and European officials have rejected Macron's remarks, and Stoltenberg warned that “if we distance Europe from North America, we weaken NATO, but we also divide Europe.”

“We firmly disagree with President Macron's assessment of NATO,” the U.S. ambassador to NATO, Kay Bailey Hutchison, later said, adding that it was “not even rational” to think of facing today's threats without NATO's security umbrella.

Meeting in the Belgian capital on November 20, the foreign ministers will discuss strategic issues, including “Russia, the implications of the rise of China, the future of arms control, and energy security,” Stoltenberg said.

The ministers are expected to recognize outer space as an “operational domain, alongside air, land, sea, and cyber,” he said, insisting that NATO has no intention of putting weapons in space.

The meeting will also address NATO's role in the fight against terrorism, including its missions in Afghanistan and Iraq, which Stoltenberg said “continue to play an important role in preventing the resurgence” of Islamic State and other extremist groups.

The secretary-general said NATO's efforts to counter hybrid threats will also be on the agenda, and announced that the alliance's “first counterhybrid support team” is in Montenegro this week.

NATO established such teams last year to provide assistance to allies in preparing for and responding to propaganda and other nonmilitary tactics.