South Korea to send 10,000 face masks to Navajo veterans to honor their service in the Korean War

"The government remembers those who made noble sacrifices to defend a strange country 70 years ago, and we hope they will proudly tell their posterity about the choice they made so many years ago" 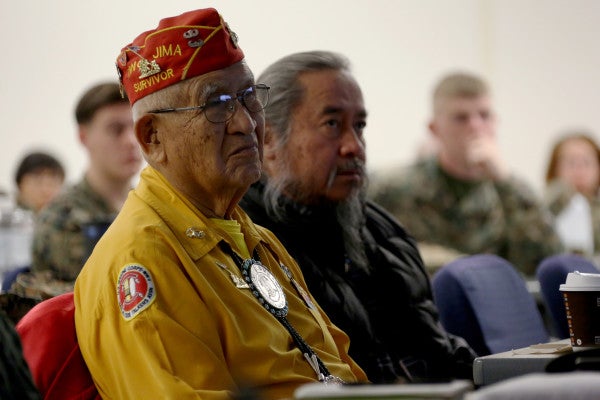 South Korea plans on furnishing Navajo veterans of the Korean War with 10,000 masks and hand sanitizer to help fight the spread of the novel coronavirus (COVID), the government announced on Monday.

The country's Ministry of Patriots and Veterans Affairs stated that the 70th Anniversary of the Korean War Commemoration Committee will deliver the supplies as “an expression of appreciation” for the Navajo veterans' contributions to the three-year conflict.

Roughly 800 Navajo men served in the U.S. armed forces during the Korean War, according to the ministry, mostly as Code Talkers. Around 130 are still alive today.

“The government remembers those who made noble sacrifices to defend a strange country 70 years ago, and we hope they will proudly tell their posterity about the choice they made so many years ago,” committee co-chairman Kim Eun-gi said in a statement.

As Stars and Stripes notes, the Navajo Nation has been especially hard hit by the spread of COVID-19 across the United States, with 4,071 positive cases and 142 deaths among a population of 175,000 as of May 18th — an infection rate on par with New York City.

“We hope our small gifts will console the veterans in the midst of the [COVID-19] crisis,” Kim said in a statement.

The influx of masks is the latest in a series of humanitarian shipments from South Korea to foreign veterans abroad ahead of the 70th anniversary of the start of the Korean War.

Earlier this month, the government sent 500,000 face masks to the United States for “the aging U.N. veterans of the Korean War to mark the 70th anniversary and to recognize their service and sacrifice,” the ministry said in a statement at the time.

“We would never compare these masks to the noble service and the ultimate sacrifice shown by the U.N. veterans during the war, but we sincerely hope our small gesture would help our veterans in dealing with the coronavirus,” Kim said.

“We will overcome the COVID-19 crisis when we stand side by side together,” he added.