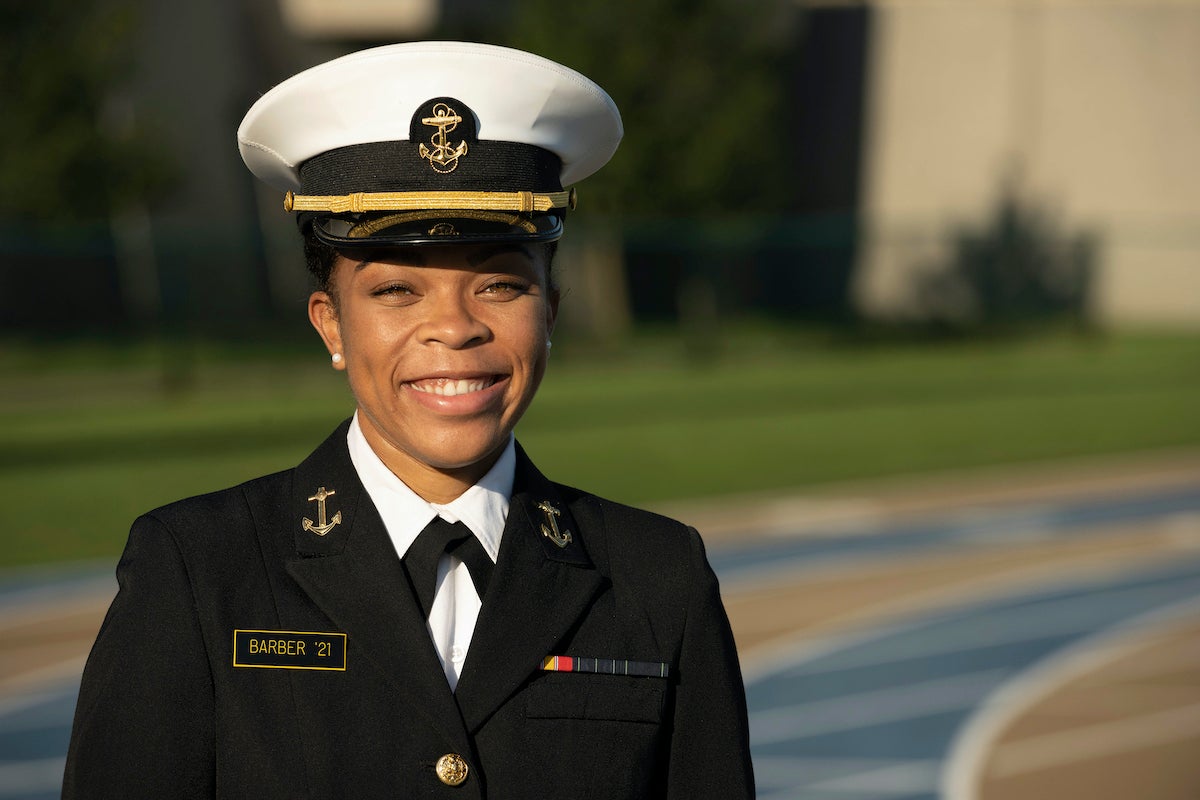 Barber will be the academy’s first Black female to command the Brigade of Midshipmen.

Commandant Capt. Thomas Buchanan announced Barber’s position, as well as other midshipmen leadership roles, on Friday, according to a statement released Monday by the academy. Barber will take over as brigade commander in the spring, assuming the position from 1st Class Midshipman Ryan Chapman. Barber currently serves as the 1st regiment executive officer.

Barber is the 16th woman to have the leadership role since 1976 when women were first allowed to attend the academy. The first was Julianna Galiana, who graduated in 1992. The brigade commander is the highest leadership position, that of a midshipman captain, within the brigade, and is the only “six striper,” a reference to collar insignia worn on the midshipman uniform.

“Earning the title of brigade commander speaks volumes, but the title itself is not nearly as significant as the opportunity it brings to lead a team in doing something I believe will be truly special,” Barber said a statement released by the academy. “I am humbled to play a small role in this momentous season of American history.”

Barber, of Lake Forest, Illinois, is a mechanical engineering major who plans to commission into the Marine Corps following graduation. She is a part of the Navy Women’s Varsity Track and Field Team and currently holds a record for the outdoor 4x400m relay, according to the release. She also serves as the co-president of the Navy Fellowship of Christian Athletes Club and secretary of the National Society of Black Engineers. Barber belongs to the gospel choir and the Midshipman Black Studies Club.

Barber helped create the Midshipman Diversity Team, which is working to promote diversity, inclusion and equality among the brigade.

“The reason I’m so proud to go to the Naval Academy is because of the context of my history, and knowing for nearly 20 years after USNA was established in 1845, Annapolis was still an active slave port. But now 150 years later, the status of someone who looks like me evolved from a slave to now a midshipman and soon to be officer,” Barber said in a video produced by the team.

In a video celebrating the founding of the academy, Barber spoke about the people who came before her and made it possible to attend the academy. She particularly focused on Janie Mines, who graduated in 1980 and was the first Black female midshipman to attend. Mines was one of the first people to announce Barber’s new position.

“Those are the things that motivate me, just knowing I’m standing on the shoulders of giants, and I hope one day I can also be the giant that someone else can on my shoulders, too,” Barber said in the video.

Barber was one of 30 midshipmen considered for brigade commander for the spring semester. She was then interviewed by a board, which included Chapman, Buchanan, battalion officers and the brigade master chief.

“She is a catalyst for action, a visionary, a listener, a doer, and a person driven by compassion, by faith, by a fierce sense of passion and heart full of love,” Chapman said in the release. “Sydney is the perfect person to lead the brigade.”

As brigade commander, Chapman told The Capital he planned on focusing on mental health, participating in the Midshipman Diversity Team and working with athletes. Barber was not immediately available for comments about her upcoming semester leading the brigade.

However, in the Founder’s Day video, Barber talked about a future for the next generation of midshipmen.

“My vision for the next generation of midshipmen is to be constant learners of their environment, to push beyond the limits of what they’ve experienced, what they’ve known their entire lives, push the glass ceiling up further and further, try to craft the environment we want going forward,” she said.

As the next brigade commander, Barber broke, rather than pushed, one glass ceiling.