The U.S. Naval Academy has said it will charge a midshipman who's been accused of allegedly dealing cocaine and other... 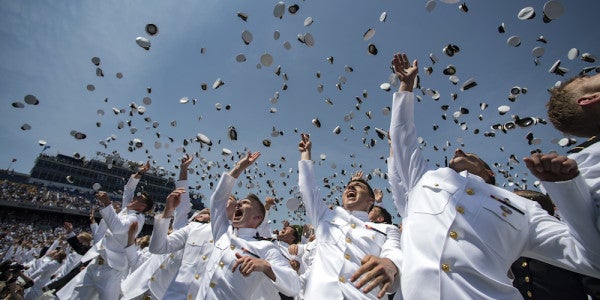 The U.S. Naval Academy has said it will charge a midshipman who's been accused of allegedly dealing cocaine and other narcotics in what may be one of the biggest drug cases at the school in years.

Some of the charges stem from an investigation started in November by the Naval Criminal Investigative Service. Naval Academy superintendent Vice Adm. Ted Carter, who was given the results of the investigation, decided to recommend the charges.

Some of the charges are related to a June 15 arrest at the Firefly music festival in Dover, Delaware. Police arrested two Ohio men after they allegedly sold ecstasy to undercover police officers. Upon searching the men's car, police say they found 33 grams of ecstasy, 4.6 grams of cocaine, 1.1 grams of marijuana, and a digital scale.

The Navy investigation that started in November has led to the dismissal of six midshipmen for using illegal substances. Another five have been administratively disciplined for drug-related violations. The illicit substances involved were cocaine, ecstasy, ketamine, and hallucinogenic mushrooms, according to the AP.

Carter, the academy superintendent, gave an update on the investigation during a Board of Visitors meeting in April. He said at the time that the suspected distributor was a student and that the academy had made changes to its urinalysis drug-testing.

“Every midshipman will get tested at least three times a year, and they won't know when it is,” Carter said at the time. Carter said that “some very responsible midshipmen” had reported the drug use to academy officials. Carter denied that there was a wider drug-use problem.

“I have full confidence that we don't have a drug issue at the Naval Academy,” he said in April, attributing the case to “some bad actors.”

Between December 2010 and August 2011, 16 students at the academy were dismissed for the use or the possession of “spice,” or synthetic marijuana.