The midshipmen have not been on campus since they began spring break on March 6 and were ordered not to return. 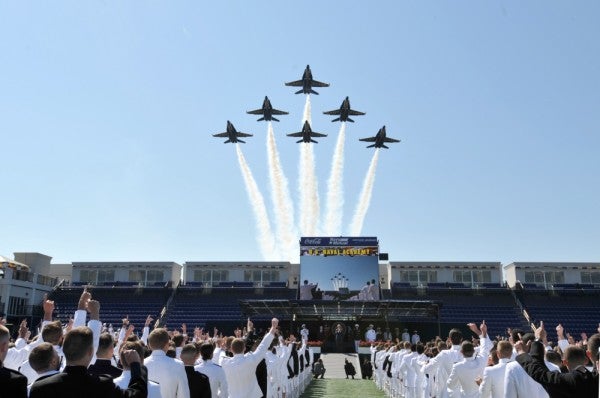 Coronavirus precautions may have stopped the Naval Academy Class of 2020 from having the fanfare of graduation in a packed stadium, but the midshipmen will still commission on the Yard in uniform.

Naval Academy officials will start calling first class midshipmen back to the Yard in May to move out and commission in five groups of approximately 210, spokeswoman Cmdr. Alana Garas said.

The first group will return on May 11 and have two days to move out and commission in private ceremonies, as all the groups will. There will be a half-day gap in between each group to sanitize Bancroft Hall, Garas said. All five groups will be commissioned and moved out over 10 days.

Garas said the academy is still trying to figure out what order midshipmen will be called back in and added they will be given more than 24 hours notice.

The first day on the Yard will be used for packing up and administrative processing. While moving out, only four midshipmen will be allowed in a company area at a time to allow for social distancing, Garas said.

During each group’s last day on the Yard, they will participate in a private, socially-distanced commissioning ceremony that will be filmed. The videos will be incorporated into a virtual ceremony with live segments on May 22, the day midshipmen were set to commission together. The five private ceremonies will include the midshipmen in uniform taking the oath of office.

This will be the first and last time first class midshipmen, part of the 4,000-strong brigade, will be at the Naval Academy since they began spring break on March 6 and were ordered not to return when it ended. The break was extended two weeks until the spread of the virus could be determined. Midshipmen started online learning on March 20.

Earlier this month, the academy had announced it would virtually commission midshipmen and not have an in-person event. But Vice Adm. Sean Buck wrote in a letter at that time that more guidance was forthcoming on how to make the ceremony “as unique and as personal as possible.”

The Air Force Academy in Colorado held a scaled-down commissioning ceremony April 18 with Vice President Mike Pence, but with no crowd at its stadium as cadets stood 6-feet apart and wore masks.

President Donald Trump said he plans to give the commencement speech during an in-person ceremony at the Military Academy at West Point on June 13. This would require the graduating cadets to return to campus. They left for spring break and have transitioned to online learning.

Jackie King, the mother of a graduating midshipman from Suffolk, Virginia, said her son was just notified of his return date Thursday. To comply with social distancing, she said he won’t be allowed to pack up or commission with any of his roommates.

“I’m happy for them that they’re having some kind of an in-person swearing-in. I really am,” King said. “I think he’s relieved to know the plan now. There’s still a lot of up in the airs but it’s at least nice to have the beginning of the plan. “

Ellen Foley, an Annapolis-based grandmother of a midshipman, was upset when she heard graduation would be virtual. She’s happier to hear her granddaughter will still be commissioned in uniform, but still disappointed with the academy.

If they can’t all be together, she’d like to see midshipmen graduate with the companies they started in as plebes.

“It’s a token to appease. I think it helped a lot. I think it’s better that they’re in uniform. But if they had done it by company I would be very happy with that,” Foley said.

Still, she wants an explanation from Buck.

“I would like the supe to explain why he has chosen what he has chosen to do,” Foley said. “I don’t understand how he made a decision to take graduation away from them as a group. I’m very disappointed at the leadership of the Naval Academy at the present time because there’s no explanation. You just look at it and say, ‘Why?’”