A naval officer who was investigated for hate group activity and separated from the service in 2009 over anti-war statements... 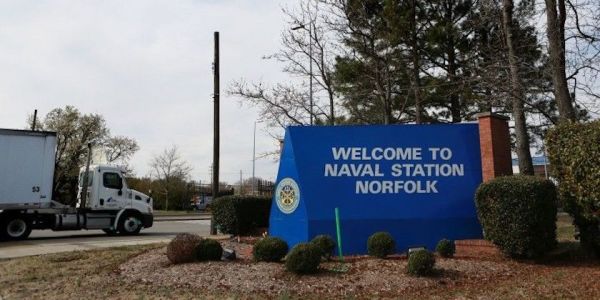 A naval officer who was investigated for hate group activity and separated from the service in 2009 over anti-war statements has been reinstated to active duty after an administrative board ruled that the Navy erred in handling his case, according to federal court records.

Cmdr. John F. Sharpe, a former lieutenant commander and public affairs officer assigned to the aircraft carrier USS Carl Vinson, was reinstated in February 2016 by the Board for Correction of Naval Records, according to personnel records.

The records – including the board's review of the case – were made public as part of a 2015 lawsuit seeking back pay and other relief filed in the U.S. Court of Federal Claims. Sharpe returned to active duty in February 2017 and worked at the Navy Public Affairs Support Element in Norfolk until April 6. Since May 30, he has reported to the Office of the Chief of Naval Information at the Pentagon and is a liaison at the Fort Meade-based Defense Media Activity, planning, coordinating and evaluating Navy productions, including photos, videos, print and graphics, CHINFO director of media operations Cmdr. Bill Speaks said Friday.

Sharpe's reinstatement hinged largely on an assertion that he was improperly denied his right to trial by court-martial by Vinson commanding officer Capt. Walter E. “Ted” Carter, Jr. after Sharpe was presented with charges that statements he made in a 2006 internet interview and in a book that he co-edited were contemptuous toward then-President George W. Bush. Sharpe instead was ordered to non-judicial punishment, or captain's mast, after Carter invoked the “vessel exception” – a military law that allows leadership to deny service members' right to demand a court-martial, provided they are attached to or embarked on a vessel.

Sharpe, a 1993 U.S. Naval Academy graduate and former submarine officer, was assigned to the Vinson in June 2006 while it was undergoing its refueling and complex overhaul in Newport News. He was removed in March 2007 and reassigned a month later to Commander, Naval Air Force Atlantic. Following a captain's mast in May 2007, Sharpe was made to show cause for retention before a board of inquiry. That three-panel board recommended Sharpe be discharged. He was separated Sept. 30, 2009.

Sharpe told The Virginian-Pilot in 2007 that he founded IHS Press, a Norfolk-based publisher of Catholic titles, and the now-defunct internet forum Legion of St. Louis. Both gained the notice of the Alabama-based Southern Poverty Law Center, which called the organizations “two of the most nakedly anti-Semitic organizations in the entire radical traditionalist Catholic pantheon.” At the time, Sharpe told The Pilot that neither group was anti-Semitic or affiliated with supremacist groups.

A Naval Criminal Investigative Service investigation initiated in March 2007 after a journalist asked about the assertion found that Sharpe had “no substantive links” to “unlawful extremist groups,” according to court documents. But, Sharpe's actions had previously caught the attention of the Navy. In 2004 and 2005, while stationed at the Pentagon, Sharpe co-edited, under the name J. Forrest Sharpe, a two-volume “Neo-Conned” anthology that criticized the Iraq war. After a Navy investigator declined to take or recommend any action, Sharpe received a letter of caution as a corrective measure from his supervisor, Navy Chief of Information Rear Adm. T. L. McCreary, who reminded him “to exercise greater care” performing his duties. He was also told he could continue to promote and sell the books, provided he complied with regulations and did not associate his official duties with his private activities.

A preview to one of the articles in those books, in which Sharpe accused the Bush administration of hypocrisy in its dealings with the United Nations over the Iraq war, later formed the basis for one of the two charges for which he was later discharged, court documents show.

Other statements that led to Sharpe's discharge came from a May 17, 2006, interview about the books. In that interview, according to court documents, Sharpe, who was introduced by his pen name with references to his past naval service, described a scene in which troops would have to reckon with God because Bush ordered them to murder Iraqis.

Carter wrote in a punitive letter of reprimand to Sharpe on May 18, 2007 – two days after his captain's mast – that his misconduct “conveyed disrespect” against Bush and brought discredit upon the Navy and his shipmates. Carter also wrote that Sharpe had undermined his role as a public affairs officer on the Vinson, upon which he was “expected to explain the mission of this command and its role in the Global War on Terrorism in a professional and unbiased manner, without regard to your personal beliefs or opinions.”

The SPLC website still lists IHS Press among the “hate groups” active in Hampton Roads, although the IHS website does not appear to have been updated in years. A phone number listed there is no longer in service, and its address leads to a box at a Pak Mail store in Norfolk. A manager there said she could not say if IHS still maintains a box. A John Sharpe is listed as the organization's president on IHS' last tax-exempt filing, in 2013, which lists $29,617 in revenue and $147,628 in net assets.

When reached by phone, Sharpe refused to describe his activities between his Navy separation and reinstatement; nor would he say whether IHS Press is still active. He said he would respond to questions by email, if he had time. He did not respond to emails sent Wednesday and Thursday.

In its decision to reinstate Sharpe – which includes restoring and clearing his record – the board relied on a 1997 ruling by the United States Court of Appeals for the Armed Forces that says the operational status of a ship and the service member's relationship to it are relevant in whether the vessel exception may be applied. The Vinson was not operational while it was in the yards and Sharpe spent most of his time working from a Newport News office building while assigned to the ship, the board said. It also noted that 10 weeks passed between when Sharpe was removed from his assignment to the carrier and his captain's mast, which was also held ashore.

The Navy also cited compositional errors with the way it handled the board of inquiry, including the presence on the panel of a commander who had prior knowledge of the case. It also agreed with a July 3, 2007, letter from McCreary in which he wrote that he thought his letter of reprimand regarding the Iraq war books settled the matter and that no further action was needed, provided Sharpe complied with his counseling. McCreary retired in October 2006.

As a result of his reinstatement, Sharpe was promoted to commander, which had been halted as a result of his case. He also received more than $666,000 in back pay and Norfolk-based housing allowances, according to a ruling in his federal claim case.

Judge Thomas C. Wheeler, in an opinion filed Nov. 8, denied Sharpe's argument that he should receive sea pay as well as an increased housing allowance tied to the Vinson's 2010 move to the pricier San Diego market, because his corrected record now shows him attached to the ship through Feb. 12, 2017. That would contradict Sharpe's earlier assertions before the Navy board that he was not technically on the ship, and there was no evidence he would have remained with the Vinson for that long, Wheeler ruled, noting that his rotation to the carrier was scheduled to expire in June 2008.

Wheeler accused Sharpe of “playing fast and loose with the courts,” saying he “looks to derive a windfall from a technicality he told the BCNR to ignore yet implores this Court to give full weight.”