A sailor aboard the USS Laboon was standing watch one morning last July while the guided-missile destroyer was moored at... 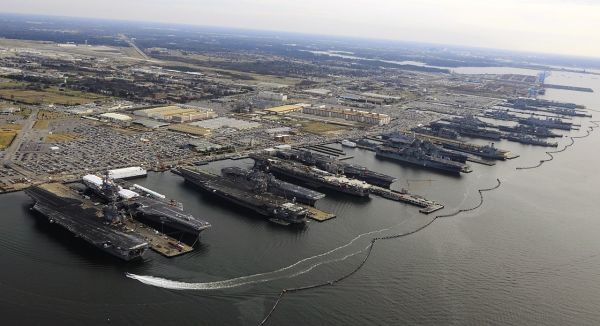 A sailor aboard the USS Laboon was standing watch one morning last July while the guided-missile destroyer was moored at Naval Station Norfolk when he noticed something strange.

Just off Pier 7, he saw what looked like someone in scuba gear surfacing from beneath the harbor's murky waters in broad daylight, only to quickly resubmerge.

The problem: There shouldn't have been anyone there.

An unauthorized diver that close to a warship could pose a substantial threat, so the sailor drew his weapon and alerted others on the Laboon to a possible incursion at the world's largest naval base. In the frantic hour that followed, the sailor reported three more sightings of a diver who ignored shouted commands, according to a Naval Criminal Investigative Service report obtained through the Freedom of Information Act.

The reports triggered an underwater manhunt, with piers placed on lockdown for several hours.

Nobody wanted to risk another major security lapse at the base.

Three years before, an unauthorized civilian truck driver shot and killed a sailor with a gun he had taken during a struggle with another sailor who was standing watch aboard a destroyer.

That attack aboard the USS Mahan led to multiple investigations, numerous disciplinary actions and widespread changes to base security designed to prevent something similar from happening again.

Yet months after the sailor aboard the Laboon spotted someone in the water, no changes in security have been made. Navy officials believe they would have found a diver in the water if there was one.

Shortly after the initial sightings, nearby ships turned on their active sonar – which would likely cause a diver to surface – and found nothing. Neither did a team of Navy divers. No explosives or other devices were found planted on ships or piers.

The NCIS investigation didn't identify any suspects. But the sailor aboard the Laboon remained adamant in interviews with investigators that he saw a diver.

Whatever it was – if there was anything at all – got away. The only thing left behind was a mystery.

This much is known: The sailor aboard the Laboon wasn't the only one who reported seeing a diver.

A Navy security officer on the lower level of Pier 7, responding to the reports of a possible diver, also told NCIS that someone was in the water wearing a black wetsuit, hood, mask and regulator. An NCIS agent later wrote that the diver would have been about 25 feet away from where the base patrolman was standing on the pier.

They weren't the only ones searching. The NCIS report says several other sailors aboard the Laboon and the nearby destroyer USS Monterey were scanning the water. Not only did they say they didn't see a diver, there was no sign of air bubbles or ripples in the water that might indicate someone was there.

One sailor on the Laboon said the demeanor of his colleague who made the initial diver sighting changed in an unspecified manner each time he said he saw something and tried to get others to see it. An NCIS agent who interviewed the sailor who made the sighting wrote that the man was “certain what he had seen was a diver, and provided a sketch of what he had witnessed.”

The sketch includes a drawing of a red and silver canister attached to the diver's back. The Laboon sailor also told agents that he saw the diver wearing a black mask that was tinted and had a “breather with two tubes.”

For Joe Michello, the sailor's description doesn't add up. Michello is a former submariner who now owns Dive Services Inc. in Virginia Beach, which caters to technical and commercial divers. Michello said the red-and-silver tank the Laboon sailor described likely would have emitted bubbles if it were on his back as an open-circuit air tank.

“They should've been able to track him with the bubbles,” Michello said. “So I'm thinking, maybe they didn't see them or something like that.”

Michello said that if the diver was using a closed-circuit tank that doesn't emit bubbles – like those used by Navy SEALs – it likely would not be painted red so someone could see it.

“With a closed-circuit system, you wouldn't have one red tank, especially if you're going for stealth. With the new Navy system you'd have a couple black tanks on the back,” he said. “If it was the old Navy system it would be a single tank around where their stomach is.”

After consulting a map of Naval Station Norfolk that shows Pier 7 about halfway along the base's waterfront, Michello also said the distance a diver would have to swim from an area with public access like Willoughby Spit to get there would be too far. He said at a maximum depth of 50 feet on a single tank, considering tides, a diver would likely only have about 30 minutes of air.

“Anybody who is a military guy or a recreational/technical diver – it's too far. He knows he's doing that, and he's going to get caught,” Michello said. “It's too far a swim.”

That raises the question: If it wasn't a diver, what was it?

Michello suggested the object could've been a harbor seal, but he acknowledged that doesn't explain the red color the Laboon sailor reported.

The Virginian-Pilot gave the Virginia Aquarium & Marine Science Center a description of the reported diver to see if it could've been confused with an animal. The aquarium's staff said the animal most likely to be confused for a diver that time of year would be a manatee.

“They come up for air, they’re large enough to possibly be confused for a diver, and they can carry an algae load along their back which might be green or brownish-red,” said aquarium spokesman Matt Klepeisz.

Manatees are typically found in Florida and southeast Georgia, but they sometimes explore further north during the summer, according to the U.S. Fish and Wildlife Service, which manages the species. A manatee was spotted in Rudee Inlet in Virginia Beach in July 2016, and one was seen in the York River near the Virginia Institute of Marine Science in November.

A seal is also a good guess, Klepeisz said, but the time of year the diver was spotted is off for that.

“We typically see seals during cool weather and lower water temps,” he said. “Seals do tend to pop up with their heads above water to breathe, and they can have a darker patch around their eyes resembling a mask, but this theory does not lend itself to anything red along the back resembling a tank.”

To be certain, neither a diver nor a manatee should be able to just wander onto the base.

A barrier system is in place in the water near piers at Naval Station Norfolk to keep unauthorized boats and divers from entering. Boats also patrol the waterfront, and there are signs warning that it is a restricted area. But the barrier also opens to allow ships in and out. Beth Baker, a spokeswoman for Navy Region Mid-Atlantic, said marine life does sometimes enter the waterfront area.

Baker declined to say how long it had been since the barrier was opened when the possible diver was spotted, but she said that no holes were found in the barrier and that it was properly working at the time. She declined to provide further details on how the barrier operates, citing security concerns.

The sailor who spotted the possible diver was a petty officer 3rd class whose job aboard the destroyer was as a fire controlman, which involves manning the ship's weapons systems. It also requires vision that is correctable to 20/20, according to a Navy job description.

Baker said that neither the security officer nor the Laboon sailor were disciplined following their reports and that the Navy has made no determination about what they witnessed.

“It is important to note that all sailors and civilian personnel on our bases are trained to be vigilant of their surroundings and are encouraged to report anything they see that may be unusual or possible suspicious activity,” she said.

Instead, it focused on another threat from the sea: waterborne drones.