After COVID-19, the US needs to worry about a ‘7th domain’ of warfare, top Navy commander in Europe says

"I am opining now about a seventh domain, and that seventh domain is just simply germs. It's the biosphere that we operate in, and I think we're going to have to take that into account in our preparations for deterrence and defense in the future," said Adm. James Foggo, the commander of U.S. naval forces in Europe and Africa. 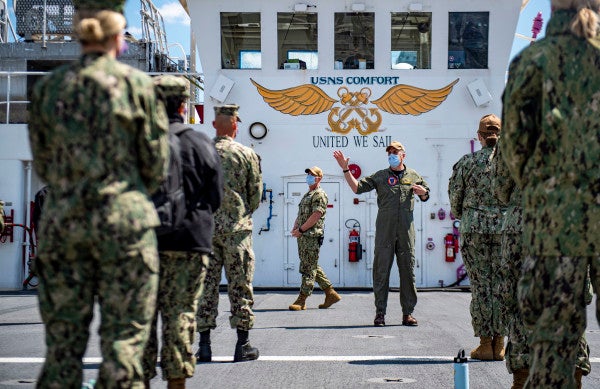 The coronavirus pandemic has scrambled US military operations, halted troop movements and is cutting short major exercises. US troops have also been supporting civilian authorities and in some cases working alongside local health workers.

What has become clear is that the military will in the future have to take into account public-health issues when assessing threats, according to Adm. James Foggo, the commander of US naval forces in Europe and Africa.

Foggo oversaw NATO exercise Trident Juncture, which took place in and around Norway in late 2018. The exercise, the first of its kind in decades, included some 50,000 personnel, tens of thousands of vehicles, and dozens of ships, including the aircraft carrier USS Harry S. Truman, the first US carrier to sail above the Arctic Circle since the 1990s.

Logistics was the “Achilles heel” of that exercise, Foggo said Wednesday during a webcast as part of the Navy League's annual Sea, Air, Space conference.

“At the time I said that logistics was the sixth domain in warfare, in addition to land, air, sea, space, and cyber,” Foggo said.

“Well, I am opining now about a seventh domain, and that seventh domain is just simply germs. It's the biosphere that we operate in, and I think we're going to have to take that into account in our preparations for deterrence and defense in the future,” Foggo added.

What the U.S. government knew about the coronavirus and when it knew have been points of contention in recent weeks. Foggo said Wednesday that the pandemic “kind of snuck up on us” but acknowledged that others foresaw something like it.

“If you go back to 2015, Bill Gates did a TED talk, which was pretty impressive. I didn't see it until a couple of months ago, and it was on what happens during a pandemic” and made reference to coronaviruses, Foggo said.

“Gates, I have to give him credit. He said in addition to doing war games and tabletop exercises, we ought to do some germ [exercises], and I think he's right, but I think we have to incorporate that into our normal planning process and our normal exercise process that the J-codes, the J-7s of the world, actually prepare and help us execute,” Foggo added, referring to members of the U.S. military's joint staff who are responsible for planning and development.

'We're going to have to plan ahead'

As of Thursday, the Department of Defense has had more than 4,600 coronavirus cases, including nearly 2,900 among service members.

The highest-profile outbreak has been aboard the aircraft carrier USS Theodore Roosevelt, which is now docked in Guam. But Europe has been one of the hardest hit regions on the planet, especially Italy, where Foggo's command is based.

“It hit us earlier than it did the United States, here in Italy, where we have several places and bases of the joint force that we operate,” Foggo said, citing Aviano Air Force Base in northern Italy and his headquarters in Naples, as well as Sigonella Naval Air Station in Sicily and the town of Gaeta, home port of U.S. 6th Fleet flagship USS Mount Whitney — “my favorite ship in the United States Navy,” Foggo said.

In the post-coronavirus world, the physical testing required ahead of Navy deployments “won't be sufficient,” said Foggo, a submariner.

“We're going to have to plan ahead on how to protect the force against something like the coronavirus until we get a vaccine against COVID-19. And then beyond that, there will be a next coronavirus,” Foggo said, adding that he thought the military would be better prepared for that future scenario.

But the United States' struggle to respond has bolstered calls, often made by progressives and others on the political left, to reevaluate U.S. national-security priorities and to reassess what the U.S. spends on defense.

The pandemic also looms over the next defense budget, the timeline of which is in doubt due to Congress shutting down over health concerns.

“I want to know a single person in this country who believes that the allocation in terms of our spending, of having almost $740 billion going to defense but only having $50 billion collectively going to public health … whether that makes any sense,” Democratic Rep. Ro Khanna, a member of the House Armed Services Committee and the Congressional Progressive Caucus, told reporters Tuesday.

“By investing in yesterday's wars and yesterday's defense establishment, our leaders have failed to make the investments that would have kept Americans safe,” Khanna added. “Progressives need to make case for a much savvier 21st-century national-security strategy, in light of COVID-19, that speaks to Americans' real security concerns.”