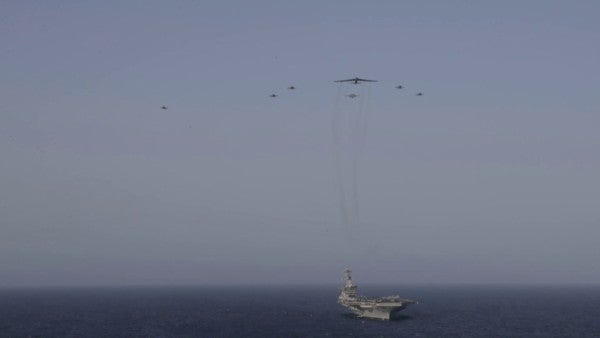 The U.S. began deploying numerous troops and military assets to the U.S. Central Command area of responsibility last month in response to intelligence indicating that Iran was plotting attacks on U.S. interests in the region.

The exact nature of the threat posed by Iran and its proxies is unclear, although Vice Adm. Michael Gilday recently told reporters at the Pentagon that the Iranian leadership has repeatedly made threats backed up by changes in their force posture.

Furthermore, there have been a string of attacks in recent weeks — including attacks on tankers in UAE waters, a drone strike on a Saudi pipeline, and a rocket attack in the Green Zone in Iraq — that have reinforced the U.S. military's view that Iran is involved in or plotting nefarious activities.

“Our land, air, and maritime assets are even stronger and more effective when integrated together,” Lt. Gen. Joseph Guastella, Combined Forces Air Component Commander, said in a statement. “We are postured to face any threats toward US forces in this region.”

“The training the air wing conducted with the B-52's today is an incredible demonstration of how our military can rapidly join capabilities to enhance our lethality and our ability to respond to any threat when called upon,” Capt. William Reed, Carrier Air Wing 7 commander, explained.

The U.S. military has deployed a U.S. carrier strike group consisting of a carrier, several destroyers and a cruiser, a bomber task force, an amphibious assault vessel, a Patriot air-and-missile defense battery, fighter jets, and hundreds of additional troops to the Middle East to deter Iran.

SEE ALSO: The Pentagon Is Using The Same Old Vietnam Playbook For Dealing With Iran