The ship is the first in the Ford class, and features new technology that's also been problematic. 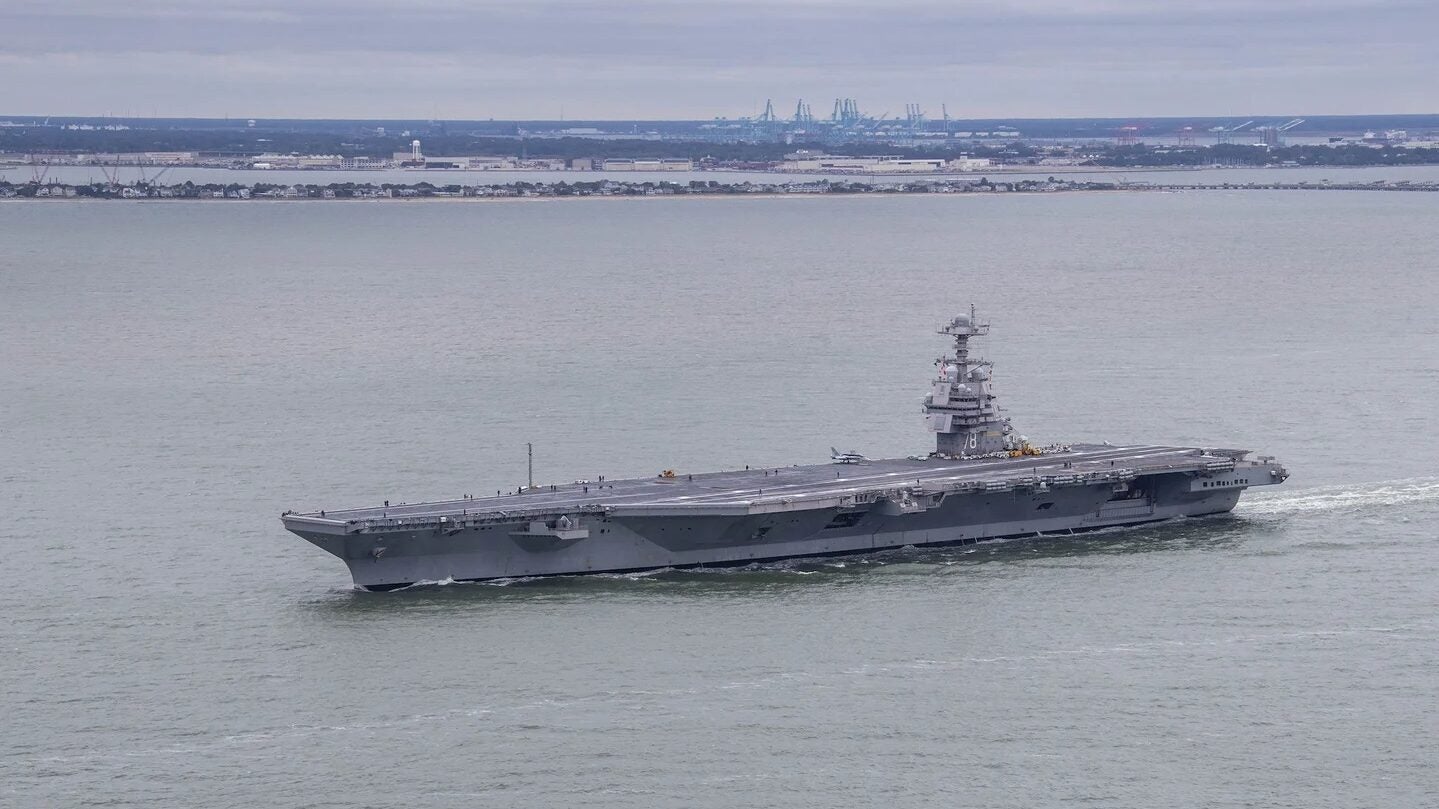 On October 4, the USS Gerald R. Ford departed Norfolk, Virginia, for a trip across the Atlantic. The ship is the first of the Ford-class aircraft carriers, nuclear-powered hangars-and-runways that serve as the centerpiece of the US Navy’s fleets and, as such, project American military might all across the globe. While the Ford has already sailed on sea trials, this will be its first deployment as an operational part of the Navy. For this mission, the Ford will include at least one foreign port of call, but the journey itself is set to be a shorter voyage than a typical carrier deployment.

The Ford’s construction began in 2009, and it was formally commissioned in 2017. In 2008, when funding for the Ford was approved, it cost $13.3 billion. The ship was first declared operational in December 2021, though it suffered delays as work on technical problems, like weapons elevators, was still needed before it could properly set sail.

The Ford is the eleventh aircraft carrier presently in the fleet to enter active service, and it’s the first of the new design. The previous Nimitz-class carriers first entered service in 1975, with the most recent of that class joining in 2009. Eleven carriers is a lot, more than that of any other nation, though it’s also the minimum allowed by Congress. It’s a number that also does not include the Navy’s amphibious assault ships, in both Wasp and America classes, which have flight decks and are comparable in size to the aircraft carriers of other nations.

The Ford borrows a hull design from the Nimitz class, though it is somewhat modified. Internally, the carrier is redesigned to maximize both its utility and minimize long-term costs. This includes, most notably, the Electromagnetic Aircraft Launch System (EMALS), which replaces the steam catapults on earlier carriers. Steam catapults help planes get up to speed when taking off from the short carrier runways, pulling a cable that helps hurl the plane as it accelerates to flight. EMALS replaces the steam buildup and launch of the previous system for an electromagnetic rail, which can be reset and reused more quickly.

The EMALS is one of several systems developed for the Ford-class carriers that have had performance issues in development, necessitating repair and modification. Other design changes include replacing the hydraulic weapons elevators of the Nimitz system with electromagnetic motors, allowing more and faster movement of munitions to and from deck. There are 11 of these elevators on the ship, and all 11 were fixed after construction, with repairs continuing until December 2021, even as the Ford was conducting trials at sea.

The Ford class also includes a more powerful nuclear power plant, allowing it to run existing and future electronics systems. Another big change with the design is that the Ford class is designed to need about 800-1,200 fewer crew than a Nimitz class, saving space, labor costs, and ultimately, allowing the Navy to fulfill more needs on more ships with fewer people.

On its deployment, the Gerald R. Ford will travel with a flotilla, formally referred to as a Carrier Strike Group. This will include three destroyers, a guided missile cruiser, two cargo ships, and an oiler, which carries spare fuel for the other ships and for aircraft. The combination, ultimately, is designed to let the carrier launch aircraft at enemy ships or targets on land, while the fleet protects the carrier from any of a number of hostile threats that might be encountered at sea, most especially submarines.

One durable risk to aircraft carriers is that, by concentrating so many people and so much force into a single ship, if that vessel is sunk a navy loses a significant amount of its fighting power. Submarines with torpedoes have long threatened carriers, and new anti-ship missiles also threaten the massive and expensive ships. This is partly why the Navy has invested in means to shoot down missiles, like with shipboard laser weapons. It is also why, when a carrier sets sail, it does so surrounded by an entourage of allies, armed to the teeth.

In total 17 ships and one submarine will form the multinational fleet on the Ford’s first deployment, including participation from the US, Canada, Denmark, Finland, France, Germany, the Netherlands, Spain, and Sweden.

“USS Gerald R. Ford is going to sail on the high seas with our partners,” Capt. Paul Lanzilotta, Ford’s commanding officer, said in a release. “We want interoperability, we want interchangeability with our partners. Our NATO partners that are sailing with us – we’re going to work with them every day, every night. That’s what it means to operate on the high seas. Air defense exercises. Long-range maritime strike. We’re going to be doing pretty much every mission set that’s in the portfolio for naval aviation, and we’re excited about that.”

For its voyage, the Ford is bringing eight squadrons of aircraft. This includes the F/A-18 E/F Super Hornets strike aircraft, which can fight other aircraft as well as drop bombs or fire missiles at ships or targets on land. The carrier will also house EA-18G Growlers, which are Super Hornets modified for electronic warfare. Early warning  E-2D Hawkeye aircraft and C-2 Greyhound cargo aircraft will also be part of the carrier’s fixed-wing component. Seahawk helicopters, capable of transport, combat, search and rescue, and anti-submarine warfare, are also part of the complement of aircraft aboard.

Gerald R. Ford’s first voyage will be across the Atlantic ocean, which would be a calm theater in which the crew and allied ships can better learn the ins and outs of the new vessel in operation.